Oh, yeah – meet The Glenlivet Winchester Collection Vintage 1966, the second uber-luxury Scotch whisky in an ultra-rare collection from this very old Scottish distillery. This bottling is just what it is – something most of us won’t be able to afford, but something you’ll at least drool over nonetheless.

Vintage 1966, according to Glenlivet, was laid down in that year by then master distiller Robert Arthur. A succession of master distillers since that time have kept watch on it, before current master distiller Alan Winchester withdrew the liquid from its sherry casks for bottling. 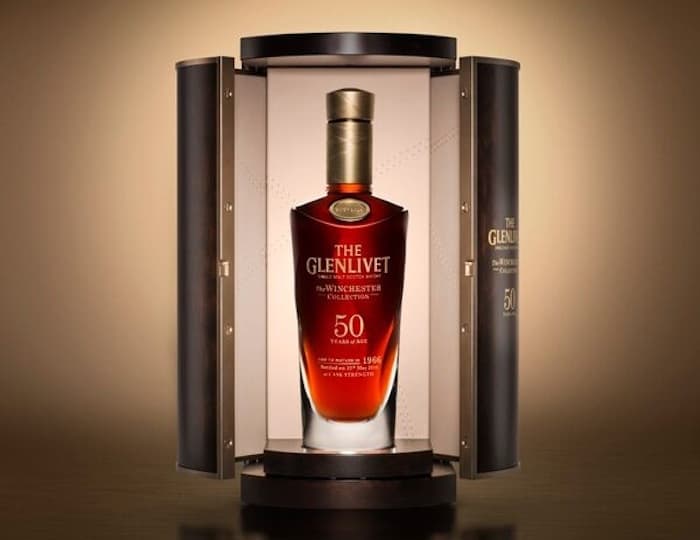 image via The Glenlivet

As with any whisky on this level, a big portion of the story usually ends up being the container the Scotch is stored in. In the case of this release, The Glenlivet does not disappoint. From their own words:

The Glenlivet commissioned Brodie Nairn of acclaimed studio Glasstorm, to produce a hand blown glass bottle around the concept of water, paying homage to The Glenlivet’s Gaelic translation of ‘Valley of the Smooth Flowing One’, with elegant flow lines lending gentle movement to the sculpted glass. Designer silversmith Richard Fox made the stunning gold stopper set with a smoky quartz Cairngorm Stone – specially selected to echo the richly dark liquid of Vintage 1966. While esteemed wood craftsman, John Galvin made the beautiful cherry wood cabinet that houses the whisky.

“The release of Vintage 1966 marks another milestone for The Glenlivet Winchester Collection,” said Winchester in a prepared statement. “Casks of this age and quality are such a rare thing these days, that the resulting single malt is literally liquid history in a glass. I’m immensely proud to release this wonderful whisky, which has been cared for and crafted over generations.”

Tasting notes for The Glenlivet Winchester Collection Vintage 1966 suggest that, on opening the bottle “the nose exudes heavenly sweet, rich aromas of treacle, moist raisins and homemade apricot jam. Take a sip, and the palate bursts with an abundance of soft fruits, treacle and juicy orange. Layered like a symphony, there’s also a hint of cinnamon and liquorice. The finish is exceptionally luscious and long lasting. From the first sip to the final, lingering flavours, it’s pure luxury that will make your heart sing.”

Hell, at that price tag, it better be the best tasting Scotch I’ll ever have.