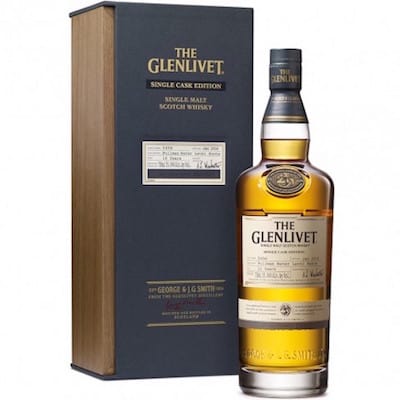 The Glenlivet Scotch brand, owned by Pernod Ricard, has a nearly 200 year history of producing quality whisky. As part of this history, it also has ties to the Pullman Company. Pullman represented, and represents once again, a kind of luxury railroad travel experience, complete with Glenlivit spirit served on board. Now, all of this history has come together in 2016 in the form of the limited edition Glenlivet Pullman Train Whisky collection.

The Glenlivet Single Cask Edition Pullman Train Collection, according to the distillery, consists of three special single barrel whiskies that are each inspired by the Pullman connection: Pullman Club Car, Pullman Twentieth Century Limited, and Pullman Water Level Route. These offerings mark the first time Glenlivet has released single casks in the U.S. market exclusively. As to the specifics, here’s information directly from Glenlivet:

Pullman Club Car: Named after the Club Car that appeared on the Pullman Trains, the original luxury travel experience in the U.S. – from the end of Prohibition when The Glenlivet was one of the first single malts to launch in the states.

Aged in Sherry Butt for 18 years, this cask has an initial burst of sweet fruity ripe pears, syrupy peaches, and creamy milk chocolate followed by a subtle background note of nutmeg. With notes of sweet orange, toasted almonds and warm cinnamon, the incredibly long and tangy finish makes this a satisfying dram. The Pullman Club Car has a limited availability of only 618 bottles.

Aged in European Oak Butt for 14 years, to the nose this cask has sweet and soft notes of honey, golden syrup and creamy vanilla, followed by a touch of floral gorse in full bloom. The palate is lively citrus orange, spicy ginger marmalade and cinnamon, rounded off by soft sweet notes of ripe pears. The finish is long and dry, with a delicate hint of spice. Only 588 bottles of the Pullman Twentieth Century Limited are available for purchase.

Pullman Water Level Route: Operating between New York City and Chicago by way of the great lakes, the Twentieth Century Limited would take the Water Level Route between the cities, which was one of the most scenic routes available.

With only 321 bottles available, this whisky is aged in American Oak Hogshead for 14 years, the cask has floral notes of gorse in full bloom, balanced with soft, creamy fudge and fruity ripe peach. The palate exudes honey and vanilla in abundance, with notes of ripe honeydew melon and traditional barley sugar sweets. The finish is soft and well balanced.

Much as luxury train rides are expensive, so are these whiskies. Suggested retail price is around $350 per bottle, and they should be available starting this month.

“The Glenlivet Single Cask Edition reaffirms The Glenlivet’s longstanding commitment to both setting standards in whisky and luxury as well as bringing innovation to the US market,” said Wayne Hartunian, Director of Scotch Portfolio at Pernod Ricard USA, in a statement. “Choosing to name these whiskies after our historic connection to the Pullman Company, a luxury standard setter in their own right, allows us to share another chapter of our rich heritage with our drinkers and gives them a taste of history that makes the perfect addition to any whisky collection.”