The Glenlivet Scotch whisky brand, fresh off of a limited edition American release of three luxury rail themed bottlings, is now turning to a much more mysterious experience for those who choose to take it up. They have unveiled The Glenlivet Cipher, a whisky created from “a unique cask combination” never used before by the distillery that will literally have you guessing with your senses to try and figure out what it is.

The Glenlivet Cipher, according to the distillery, is presented in an opaque, black bottle without any cask information. Instead, as you taste the Scotch, you’re invited to look at the label as you search “for one of the official flavors hidden within a cryptic code.” From there, you are directed to a special interactive website, guiding you through a series of choices as you challenge your “distinguished nose and palate to decode the hidden flavors in this unique whisky.” 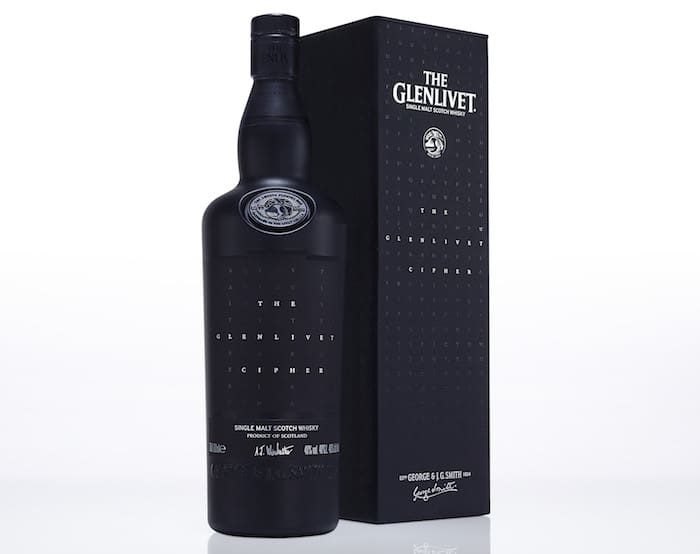 image via The Glenlivet

After walking through the interactive questions, you get a “cipher” of your personal flavor notes, alongside a score which reveals how close you came to unlocking the official tasting notes of this Scotch. It is all very mysterious, and a very smart way to drive brand interaction on The Glenlivet’s part.

“Through the launch of The Glenlivet Cipher,” said The Glenlivet Master Distiller, Alan Winchester, in a statement, “I am laying down the ultimate test for discerning foodies and drinkers around the world looking to prove their tasting credentials. The Glenlivet Cipher is unique in that it is crafted from a combination of casks never used before at the distillery, so we are excited to explore new flavour territories that build upon the flawlessly smooth and fruity style of The Glenlivet.”

The Glenlivet plans to unveil the official tasting notes for Cipher in the coming months, and in the meanwhile is encouraging those who drink this to share their results through social media using  #TheGlenlivetCipher and @TheGlenlivet. Should you want to snag a bottle of this to take part, expect to drop around $120 when it debuts globally this month.