Glengoyne is one of those Scotch single malt whisky distilleries with a great deal of history. As they put it they make “Scotland’s slowest distilled malt, unhurried since 1833.” It thus makes sense they have access to some incredibly old stocks in their aging warehouses, some of which they’ve now turned to in this release of a new 50 year old expression.

The new Glengoyne 50 Year Old, according to those behind it, was laid down back in the 1960s. It is a very limited edition offering, with only 150 bottles being made available. Said bottles come in the form of “a special crystal decanter, which features an engraved goose emblem representing the geese who migrate to the Glen each winter. Hidden within the beautiful solid oak and gold display box is also a 25ml sample of the 50 Year Old whisky, as well as individually hand numbered books which are hand signed by Robbie Hughes, the Distillery Manager.” 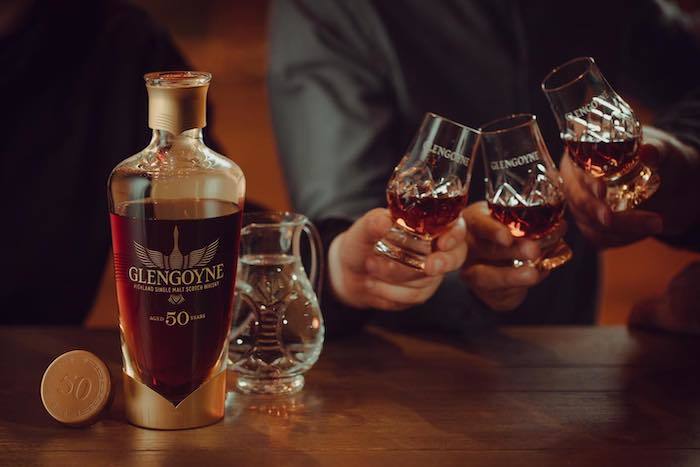 “When we first filled hand-selected oak casks with our sweet, fruity, new make spirit back in the late 1960s,” said Hughes in a prepared statement, “the Beatles were only just breaking up, Richard Nixon was US President, and Sesame Street debuted on television. A lot has changed while we’ve been waiting patiently for this unique release.

“At Glengoyne we believe that patience is always rewarded. This year we’ve all had to sacrifice spending time with our loved ones or delay celebrations. That’s why we want to make these moments extra special in 2021 with a memorable whisky that, after waiting so long for just the right moment, is truly ready to be opened and savoured.”

Pricing for the Glengyone 50 Year Old obviously isn’t on the cheap side – in this case you’re looking at a price tag of £22,500, or around $30,000 USD, for an expression that’s available now. Interestingly, distillery management decided they will “give away a special decanter of this incredibly high aged, rare whisky in 2021. After what’s been a difficult and disruptive year across the globe, the distillery will be making a moment with friends or family extra special for one group.

“An online ballot has opened for groups of five or more friends or family to submit an entry alongside a description of their perfect moment for savouring the Glengoyne 50 Year Old together next year. Whether it’s toasting a delayed celebration, or creating an unforgettable reunion, the Glengoyne team will make their special moment a reality, hand-delivering the highly sought-after whisky for one group to enjoy and savour, in good company.

“Entrants have until Monday 14th December to gather their groups and submit their moments.”

Official tasting notes for this half century old whisky are below. It becomes part of Glengoyne’s new “Fine and Rare” range, which also hosts a new 30 year old and an existing 25 year old.

16
Shares
648
Views
Share on FacebookShare on TwitterGet Our Newsletter
Cheers to the Dads! Personalize a bottle of his favorite whiskey to create a modern gift for the modern man. Use code: FATHERSDAY20 for $20 off your next order of $100 or more at ReserveBar