Glenglassaugh Distillery, based in Scotland and owned by Brown-Forman, announced recently a large new collection of 10- and 11-year old whiskies made since the distillery re-opened in 2008—after opening in 1875, closing in 1907, re-opening in 1960, and closing again in 1986. The distillery has unveiled a few new spirits in recent years, on the heels of several releases of decades-old expressions put up before the 1986 closure.

This collection, named the Glenglassaugh Coastal Cask Collection, consists of ten different single-barrel expressions, each slated for a specific market. It’s an eclectic collection, ranging from pale honey to mahogany in color, with each whiskey drawn from a unique sherry, port, or bourbon barrel. These expressions were all put up shortly after the distillery’s 2008 reopening. There’s no word on exactly how many bottles of each whisky are available, but since each batch comes from a single barrel, they will be fairly limited in quantity. The 10-year-old expressions are all priced at £89, and the 11-year old whiskies are £99—$117 and $130 USD, respectively—though the distillery notes pricing may vary by location. 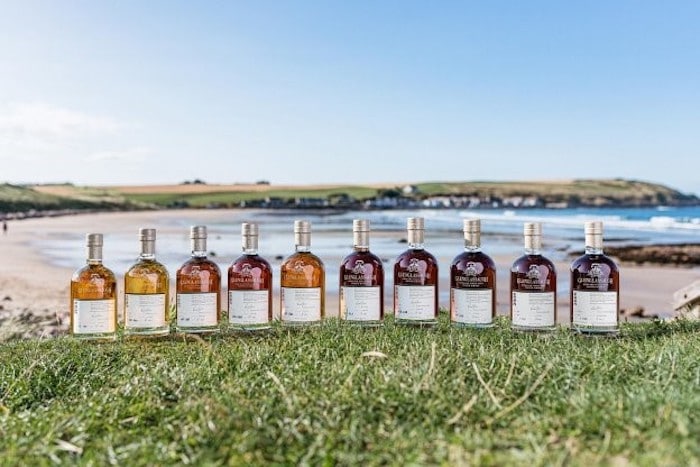 “The collection, hand selected by Master Blender Dr. Rachel Barrie, captures the lush, coastal character of this traditionally-crafted Highland single malt, defined by its location and elemental influences,” said in a prepared statement from the distillery. “As time passes and character evolves, the full collection has taken all of its deepening colour from coastal maturation in oak. The coastal warehouses benefit from the invigorating North Sea air which influences the cask maturation, creating Glenglassaugh’s signature colour and palate.”

“Nurtured by the coast,” added Barrie, “each Glenglassaugh Coastal Cask shares a unique and luscious sweetness. With tasting notes ranging from raspberry fruit jam to salted caramel; tropical fruit syrup to chocolate profiterole and clotted cream,  this collection is a celebration of Glenglassaugh’s coastal malt journey, which I hope you will savour to the full.”

The US release, from cask R12-213-1, is an 11-year-old unpeated expression aged in an oloroso hogshead and bottled at 51.1% ABV. The distillery’s official tasting notes for that expression are below: