Popular whisky distillery Glenfarclas seems to be wasting no time in getting the final expressions in its Family Collector Series to market. We just wrote a week or so ago about the 1981 Port Cask IV, and now, just a short time later, comes word of the new 1986 Refill Sherry Butts V offering.

Whereas the port cask bottling was fully aged in ex-port casks, the Glenfarclas 1986 Refill Sherry Butts V goes a more traditional route, having been aged for some 30 years in specially selected refill sherry butts to add a “lighter sherry influence” to the collection.

Like other releases in this series, it is designed to pay homage to the Grant family, who owns the distillery. In this case, the bottle honors John L. S Grant and his father, George S. Grant, who would have watched over the filling of these casks in the 1980s. 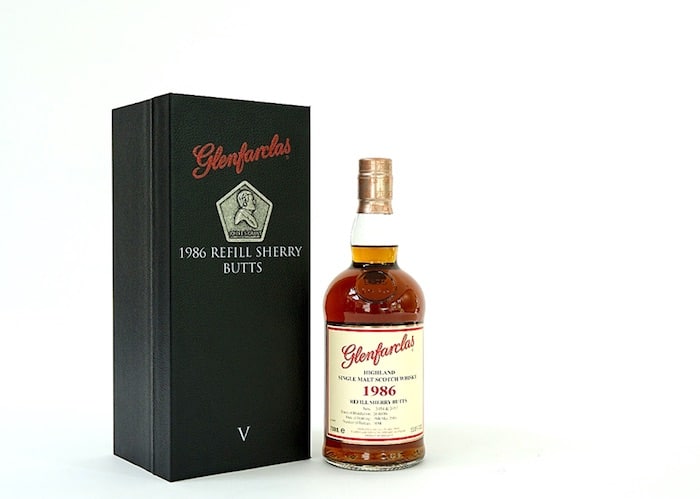 Bottled at around 53.8% ABV, the Glenfarclas 1986 Refill Sherry Butts V numbers 1,094 bottles for its total global release. One thing which is particularly interesting to note about the history of this whisky is the Grant family’s decision in the mid-1980s to actually increase Scotch production at a time when many distilleries were closed, moth-balled, or cutting back production because of a steady over-production of whisky and falling demand. The Grants were attempting apparently to be forward-thinking in their actions, pondering the simple question of “where was all the mature stock going to come from in a few years’ time?”

They now, apparently, have an answer to that question with this release.