Thanks to global juggernauts like Macallan and Dalmore, sherried single malts have successfully positioned themselves as an essential rung on the luxury ladder, somewhere between heirloom-quality watches and late-model Land Rovers. But Macallan and Dalmore are just part of the sherry story.

Earlier this year, I visited GlenDronach Distillery, one of Scotland’s most sherry-focused whisky makers. Known for a deep, dark, heavyweight style of whisky, GlenDronach has endured some challenging years to emerge as one of the most exciting rising stars (if you can call a business that has existed for almost 200 years a “rising star”) in the world of whisky.

We see the steam rising from the GlenDronach distillery before we see the building itself, which is tucked into a small valley surrounded by the rolling fields of the central Highlands. Dipping down into the grounds, we’re greeted by rows of low-slung stone buildings frosted with the telltale black mildew of aging whisky, as well as a slightly wild-feeling formal garden fanning out from the historic Glen House, a home that actually predates the distillery itself by more than 50 years. 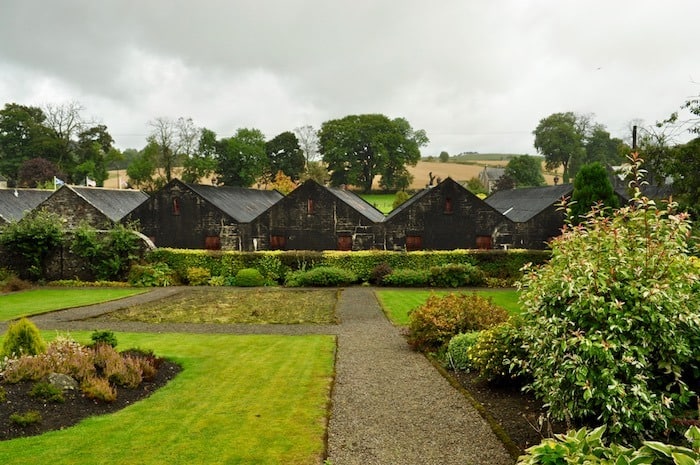 Aging warehouses at GlenDronach as viewed from the GlenHouse garden. Photo by Margarett Waterbury, image copyright The Whiskey Wash.

Inside, we meet our guide, a man named Frank Masse who, it quickly becomes apparent, knows a lot about whisky. I ask him how he’s come to know so much about GlenDronach, and he laughs. “I managed the distillery for almost 20 years,” he says. Aha. It’s a good reminder to never underestimate your tour guide, especially in Scotland.

The past 25 years have been turbulent for GlenDronach. The distillery was mothballed in 1996, but then reopened in 2001 by Allied Distillers. In 2006, it was acquired by Chivas, and then in 2008, it changed hands yet again, becoming part of the burgeoning BenRiach Distillery Company, which oversaw the brand’s return to critical and consumer consciousness. Then, just last year, Brown Forman announced it was acquiring GlenDronach, BenRiach, and Glenglassaugh distilleries in its very first foray into Scotch whisky.

And there have been additional changes beyond ownership. Floor malting was used until the distillery closed in 1996. GlenDronach used coal to heat its direct fire stills until 2005, when it transitioned to steam heat. And until production resumed in 2002, the distillery used mostly Oloroso sherry casks for maturation. A little math then indicates that some of GlenDronach’s older releases, like the 18-year-old Allardice and 21-year-old Parliament, are potentially made with floor malted grain on a direct fire still and matured entirely in Oloroso sherry casks, a kind of triple threat for whisky purists. Get it while you can, folks. 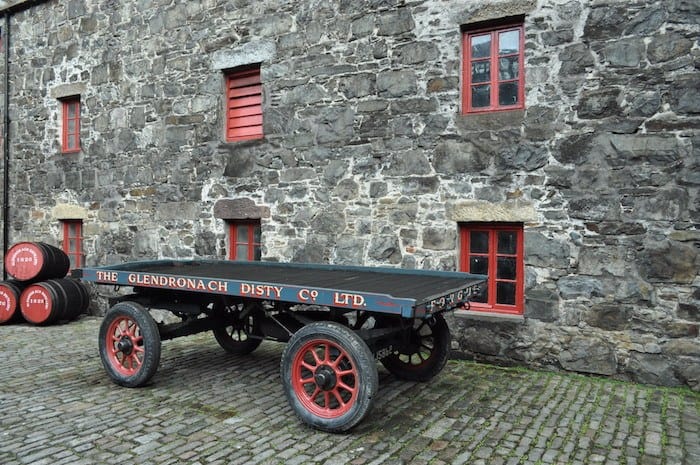 While the odd bourbon cask does find its way into the warehouses today, GlenDronach remains squarely focused on the many, varied influences of sherry casks on its whisky. Oloroso and Pedro Ximenez are the two most commonly used sherry wood types at GlenDronach, but it also employs a rainbow of other sweet and fortified wine casks, including Madeira, Sauternes, Port, Marsala, and Moscatel. In the warehouse we visited, there were nothing but sherry butts as far as the eye could see—well, and a few birds, too, illuminated by the faint light streaming in through the gaps in the warehouse roof (asbestos, hard to repair, said Frank).

Yet sherry cask maturation isn’t the only thing setting GlenDronach apart. In the distillery, I noticed a relatively unique shape to GlenDronach’s stills: a particularly pronounced swan’s neck, or arch at the top of the still leading to the lyne arm, on the spirit stills. I asked Frank what effect he thought that curve had on the flavor of the spirit. He smiled, winked, said, “That’s the secret of GlenDronach,” then coyly turned away. Some things, I suppose, must remain a mystery.

The use of unpeated malt, a sweet and fruity raw spirit, and extensive sherry casking produces a beautifully burnished spirit with rich aromas of toffee, nuts, and dried fruit. It’s one of the easiest-to-love whiskies out there, sweet and smooth enough for a tentative newbie but multidimensional enough to satisfy even the most demanding Serge wannabe.

Like Bunnahabhain on Islay, GlenDronach is also something of a Speyside local’s dram. During our visit, I heard several Scots wax poetic about the charms of GlenDronach 18-year-old, as well as mourn the recent loss of the 15-year-old expression from the core range. (One bartender assured me that the 15-year-old was slated to come back, although he speculated the reintroduction would be at the expense of the 18-year-old, a rumor that is unconfirmed by Brown Forman). 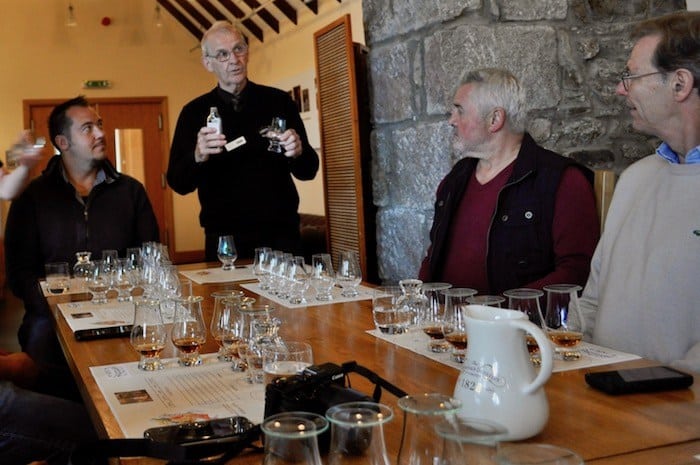 Following our tour, we sat down with an enormous group of visiting Germans to taste six different GlenDronachs. We began with the 12, 18, and 21-year-old core range expressions, then moved on to three different PX single barrel samples: an 11-year-old, a 20-year-old, and a 12-year-old, all bottled at cask strength. As the driver, I was supplied with six neatly labeled drams packaged in little vials, which I was delighted to bring home with me and taste in the peace and quiet of my own living room. All were absolutely delicious, but it was the 11-year-old PX single cask that took the cake (literally), delivering a gorgeous assortment of spice cake, gingerbread, and an amazingly distinct note of peanut brittle. 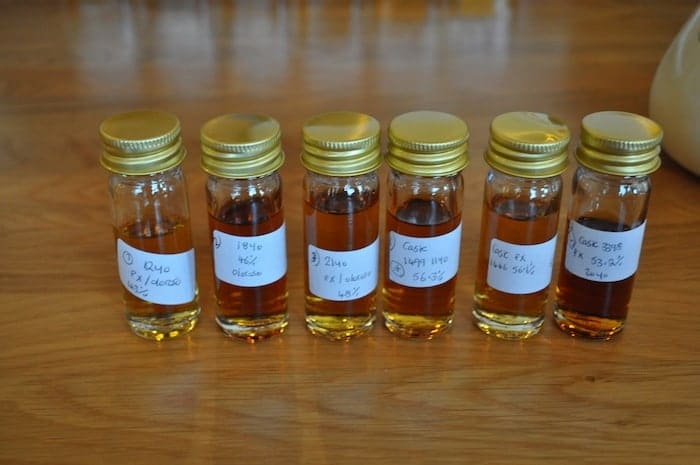 Thoughtful to-go vials let the driver have a flight, too. Photo by Margarett Waterbury, image copyright The Whiskey Wash.

If you like the majesty and opulence of sherried single malt, you owe it to yourself to get acquainted with GlenDronach, if you haven’t yet. I’m hopeful that its new American ownership will mean GlenDronach is easier to find in the States, and that Brown-Forman manages to resist the temptation to swap out those sherry casks with the ex-bourbon barrels they surely have in abundance.

428
Shares
688
Views
Share on FacebookShare on TwitterGet Our Newsletter
Get The Glenlivet 18 Year Old at ReserveBar. Shop now!