Batch 7, with a suggested retail price of £62.99 in the UK, was aged in a combination of Pedro Ximénez and Oloroso sherry puncheons, Rioja barriques and virgin oak casks. Each cask was personally selected and blended by Master Distiller Billy Walker. 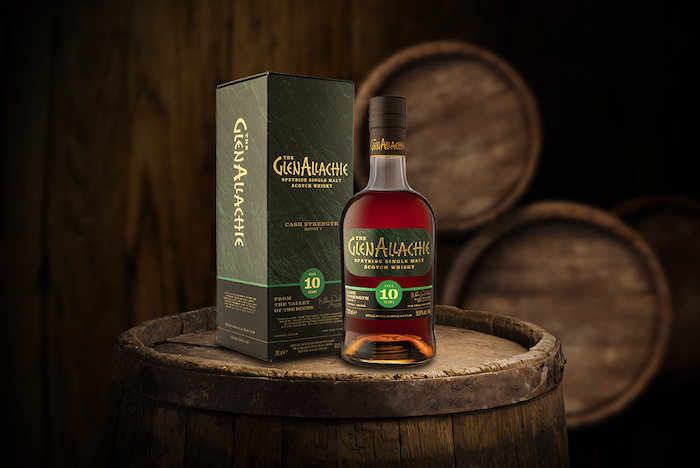 A statement from Glenallachie noted that Walker, who this year celebrates a half-century as a blender in the Scotch whisky industry, is recognized for his hands-on approach and innovative maturation philosophy. Each release of the decade-old expression reflects his expertise in wood management.

The distiller’s notes for Batch 7 show that it clocks in at 56.8% ABV, without added coloring or chill filtration, and the cask strength spirit has notes of rich mocha, stewed plums, runny honey and cinnamon.

Walker said of Batch 7, “Every batch we create of our 10-year-old Cask Strength represents the direction in which we are taking The GlenAllachie. From the outset, our defined objective has been to achieve a bold and flavorful yet balanced spirit, predominantly matured in Sherry wood, but with interesting twists introduced by unusual cask types.

“This latest batch is a complex and enjoyable drinking experience which brings together spirit from some truly exceptional Sherry, wine and virgin oak casks. I must say, this one is pretty special!”

Prior to this launch, the latest addition to The GlenAllachie’s core range was the 21-year-old Cask Strength Batch 2, unveiled last month.

One of Scotland’s few independently owned and managed distilleries, The GlenAllachie is led with an emphasis on wood policy, as its cask budget for 2021 stands at £1m/$1.2m. With 16 on-site warehouses holding more than 50,000 casks, the distillery has complete control of the end-to-end maturation process.

And the distillery chooses to reduce its production capacity from 4 million to 500,000 liters of alcohol, and increases its fermentation period to 160 hours for an ester rich, fruity spirit.

For more information on the distillery, check out www.theglenallachie.com.