After initial aging in American oak, ex-bourbon barrels, the whisky was transferred to undergo almost two years of additional maturation under Master Distiller Billy Walker’s supervision within The GlenAllachie’s on-site warehouses. The whiskies were then bottled at 48% ABV, without coloring or chill-filtration. 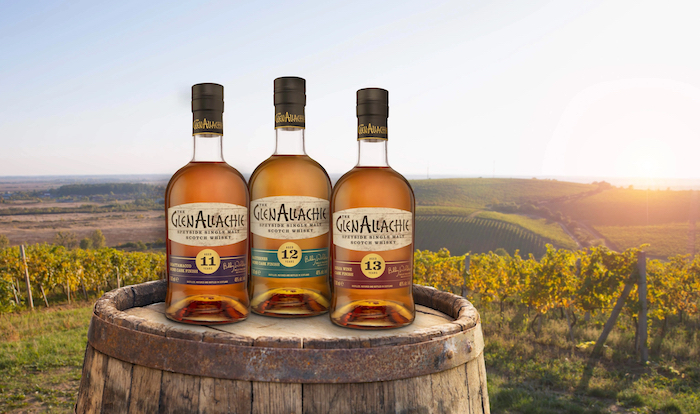 GlenAllachie 11-year-old Grattamacco Wine Cask Finish is finished in certified Organic Super Tuscan barriques made of French oak from the Grattamacco winery in the Bolgheri area of Tuscany, Italy. With a color of rich ruby blush, an aroma of honey, peaches and apricots, with toffee, almonds and orange peel can be found on the nose and moves into a taste of toffee, heather honey, red berries and peaches, fused with apricots, orange peel and nutmeg, according to official tasting notes.

GlenAllachie 12-year-old Sauternes Wine Cask Finish was first matured in American Oak Ex-Bourbon Barrels, before undergoing additional maturation for almost two years in Wine Barriques sourced by Walker. With a rich golden color, an aroma of heather honey, peaches and grapefruit, with hints of cinnamon and almonds can be found. Heather honey, treacle and pineapple, with peaches, sweet grapefruit and cinnamon can be found on the tongue, according to official tasting notes.

“We are delighted to be launching our Wine Cask Series with a trio of really interesting expressions. Cask-finishing is perhaps the most exciting part of wood management because it allows an extra layer of complexity to be added to the whisky, whilst ensuring that the distillery character is not overpowered by the influence of the Oak,” Walker said in a prepared statement. “Selecting and working with these wine barriques was a labor of love, and I’m delighted with the variety we have achieved in these three bottlings: the Grattamacco delivers a nutty, stone fruit character, the Sauternes reveals an elegant grapefruit and elderflower tone, and the Rioja overflows with red berry sophistication.”

The GlenAllachie Wine Cask Series is available from specialist retailers globally with only around 6,000 bottles available of each release.

16
Shares
1.9k
Views
Share on FacebookShare on TwitterGet Our Newsletter
Cheers to the Dads! Personalize a bottle of his favorite whiskey to create a modern gift for the modern man. Use code: FATHERSDAY20 for $20 off your next order of $100 or more at ReserveBar