The Scotch whisky making region of Campbeltown, back in the Victorian era, was said to be the whisky capital of the world for the fact it was home to more than 30 working distilleries. That number has shrunk significantly since then, with only three still open today. One of those, Glen Scotia, recently debuted its oldest and rarest expression in the form of a 45 year old bottling.

The new Glen Scotia 45 Year Old, according to those behind it, was first distilled back in 1973 before being put into refill bourbon casks. Over three decades later, in 2011, it was re-cask into first fill bourbon casks before resting for time until it was bottled this year at 43.8% ABV. Only 150 bottles of it are being made available globally.

“Glen Scotia 45-year-old is one of the most magnificent expressions to be produced by our Campbeltown distillery,” said Glen Scotia master distiller Michael Henry in a prepared statement, “and we are excited that after 45 years we are now able to unveil it to the world. Distilled in 1973, this single malt is steeped in history and is extraordinarily rare.” 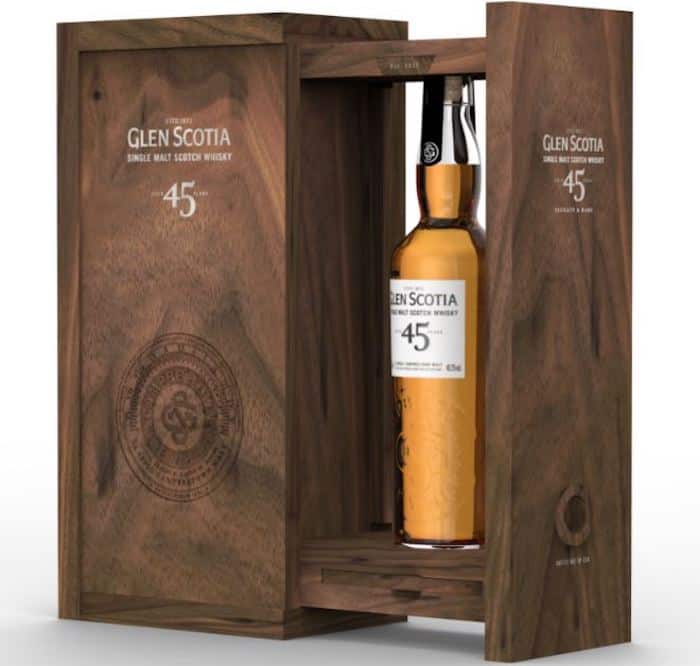 As this a higher end expression, so also is the packaging it comes in. The whisky is presented in a handcrafted walnut box “created by family-owned, UK-based luxury packaging manufacturer, Moran’s Wood Components.” It contains a delicate tile engraved with the individual bottle number and tasting notes. Inside, the case boasts embossed leather lining.

The Glen Scotia 45 Year Old is pricing at £3,795, or around $4,880 USD. Limited official tasting notes suggest “on the nose, it presents bold coastal elements, as well as sweet notes of ripe pineapple, crisp green apple, rose and vanilla. On the palate, the liquid presents caramel sweetness at first, then juicy fruit with pineapple, mango and water melon rounded by vanilla and honey.”