On the same day that they recently announced the release of their limited-edition Sherry Double Cask Finish Scotch whisky, Glen Scotia Distillery introduced an even rarer bottle: a 30-year-old Single Malt, available in a short run of just 500 bottles.

This 50.8% ABV addition to their range of single malts was created using a single distillation from 1989 that has been maturing in European Oak hogshead sherry casks, and is packaged in a gorgeous handmade case, made from sustainably sourced solid British oak. 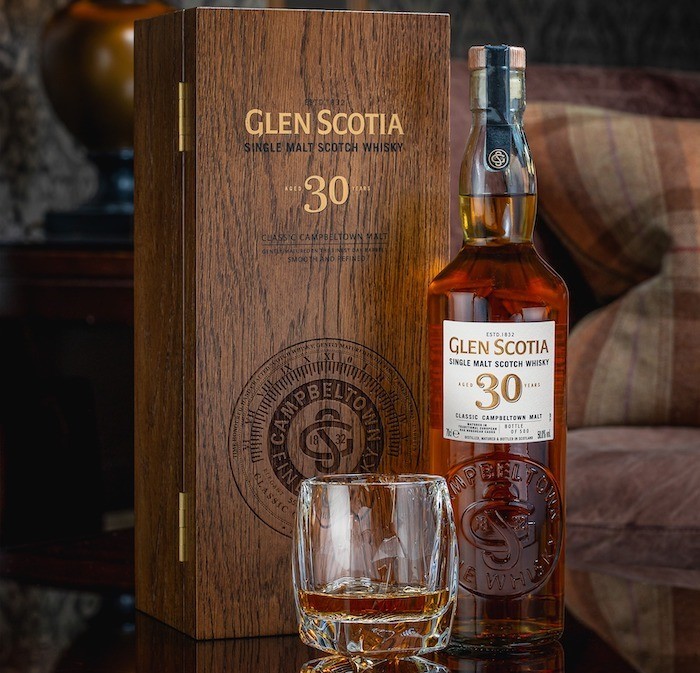 “The Glen Scotia 30 Year Old Single Malt is an exceptional new addition to Glen Scotia’s portfolio,” said master distiller Iain McAlister, in a prepared statement. “The flavour profile is deep and distinguished, showcasing the complex flavours and maritime influence that Glen Scotia has become known for. Like our distillery, the Glen Scotia 30 Year Old is steeped in history and after three decades of maturation, I am proud to finally be able to unveil this new expression to the world.”

According to Glen Scotia, this non-chill filtered whisky presents an aroma of violet and lavender that evolves into green apple and spice. Its flavors offer up notes of candied lemon, cinnamon, ground ginger, dark chocolate, and coffee.

The release of this 30-year-old single malt and their Sherry Double Cask Finish whisky caps off another impressive year for Glen Scotia. Through 2020, the Scottish distillers racked up a ton of awards, including four gold medals at this year’s International Spirits Challenge and a platinum award from the San Francisco World Spirits Challenge. One of only three distilleries remaining in the former whisky stronghold of Campbeltown, Glen Scotia also weathered the storms of the pandemic by shifting the programming for their hometown’s Campbeltown Malts Festival online, including virtual tours of their facilities and a virtual pub experience.

Glen Scotia’s 30-Year-Old is available to purchase from specialist retailers and retails for £850 (about $1,141 USD).