The Glen Grant distillery, nestled in Scotland’s Speyside region, is launching into travel retail a rather exquisite luxury single malt Scotch presented in a very unique case made from a special wood. Known as Glen Grant Fiodh, only 10 bottles are being made available at what’s likely one very high price tag.

Information put out by Glen Grant indicates Fiodh is the first in a planned line of high end whiskies known as “The Back Burn Collection.” It honors the Back Burn, a river which runs near the distillery. What’s in the bottle was distilled back in 1972, said to be the last year Glen Grant used peated malt. It was “forgotten” until earlier this year, making it roughly 43 years in age. 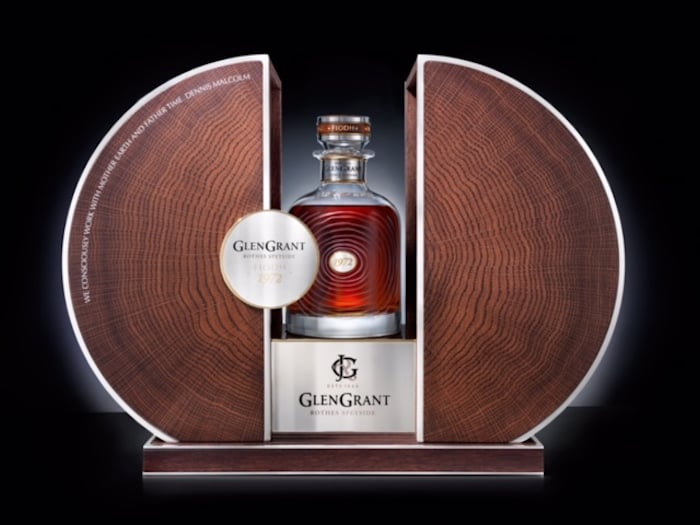 Perhaps almost more interesting then the whisky itself is the rather extremely unique packaging this Scotch comes in. According to the distillery,

the bottles are nestled in a hand-crafted casket of wood, cut from the same tree at the front and the back of the casket and fashioned to evoke the shape of the tree. Each of the ten decanters feature a hand-engraved pattern representing the rings of a tree, each one unique to each of the 10 decanters. Stoppered with solid wood embellished with pure silver and gold, the bottle is designed to appeal to collectors and connoisseurs alike.

Pretty slick, huh? It is definitely out of the reach of most of us mere whisky mortals, but it at least gives you yet another small glimpse into the very high end world of rare whiskies.

“This new whisky is our rarest and most sought after product to date,” said Leigh Irvine, GTR Director of Gruppo Campari, which owns Glen Grant, in a statement. “It is the most exquisite whisky Glen Grant has ever produced.”

103
Shares
327
Views
Share on FacebookShare on TwitterGet Our Newsletter
Get The Macallan® Rare Cask at ReserveBar. Shop now!