Former Glenturret Scottish Stillmen Get Rare Bottling Named After Them 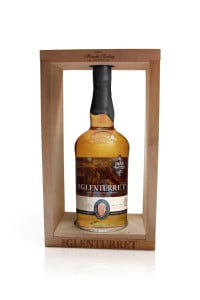 Scotland’s Glenturret distillery, founded back in 1775 in the Highlands region, is considered that whisky region’s oldest documented distillery. It is known mostly for being the “spiritual home” of the popular Famous Grouse blended Scotch, but now and again what also slips out from here are some single malt expressions. The latest of these is a rare bottling, consisting of only a few hundred bottles from a single cask nearly 30 years old.

The new Glenturret Brock Malloy Edition #Cask328 is a single barrel release that’s been bottled at cask strength. It is 28 years of age, with the cask tied to it having been filled, according to the distillery,

on the 16th December 1986 by two Scottish stillmen, Hugh Malloy and Chic Brock, whose names the rare bottling now embraces.

Although Brock and Malloy are no longer working at the distillery, their expertise meant that Cask 328 required no repair work during its slumbersome 28 years and, when Neil Cameron, Glenturret’s distillery manager tasted its contents, he described it as the best cask laid down that year.

This whisky is only available for purchase through Glenturret, with each of the 240 bottles pricing £200 (around $300 USD). Official tasting notes are found below.