If you avidly follow whisky news online, you might have come across rumblings of “Project Flavor Behavior” – a collaboration between the Scotch Malt Whisky Society and Dr. Adam Moore of the University of Edinburgh, with the goal of creating a quiz that could tell curious whisky drinkers what they should try. And if you’re thinking, “wait, I’ve seen these quizzes on Facebook before,” think again.

The SMWS approached Dr. Moore last year because of his specialized background in judgement and decision making psychology. In particular, Dr. Moore focuses on moral and economic decisions: the “interplay of emotion and cognition, their relationship to automatic and controlled information processing, and the roles of working memory, intelligence, self-control, and empathy in decision making about the self and others.” The SMWS wanted to know if it was possible to design a way to tell people what type of Scotch they should be drinking based upon their personality.

“It was certainly a possibility,” said Dr. Moore from his home office in Edinburgh. Certainly one of the more fun and interesting scientific experiments he’d participate in, Dr. Moore said that it took about a year or so from start to finish of gathering enough data to create the quiz. While some psychologists might have trouble soliciting volunteers for data collection, inviting people to come taste whisky definitely didn’t yield any shortage of subjects. In fact, they had 300% of the required number of people sign up.

“We didn’t know what aspects of people’s personality would end up matching with certain profiles,” said Dr. Moore, “we ran a ton of events in different cities across North America, Europe and Australia to get enough information to develop the program.” Each volunteer had to answer a series of questions measuring the ‘Big 5’ personality dimensions (openness to experience, conscientiousness, extraversion, agreeableness, and neuroticism). 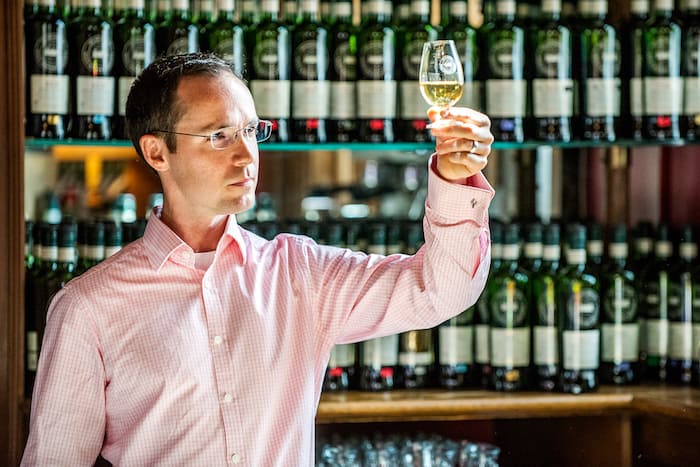 When I asked Dr. Moore how much the participants knew about the experiment, he said that people knew they up front they were linking flavor profile to their scotch preference. Most people that came to the open-invitation events didn’t have much of a background in whisky, which was more or less the intent, but for those that did it could “give them something to talk about,” said Dr. Moore.

I admitted that I took the test, and ended up with a flavor profile at the opposite end of what I typically went for: juicy, oak & vanilla. I had a very moderate character, with no one clear dominant personality trait. While I agreed with the character assessment, I was unsure of my “suggestions”: “sweet, fruity & mellow” or “deep, rich & dried fruits,” because I typically drink Islay scotches (the peaty-est of the peaty).

Dr. Moore said that since I was a seasoned whisky drinker, I had probably migrated to those flavor profiles because that’s what whisky drinkers tend to do over time: “The best thing that predicts a smoky and peaty profile is a seasoned whisky drinker.” He was right; I used to appreciate the flavors suggested to me, but they reminded me so much of the Irish whiskies I used to enjoy that I began to lean towards a flavor profile I hated while going through my scotch education at age 22. “The links between personality and flavor profiles don’t take into account the profiles you’ve developed with repeated experience.”

The feedback from the project has been nearly universally positive, said Dr. Moore, and he welcomes any future collaborations with the SMWS in the future. Of course, who wouldn’t enjoy traveling to meet diverse people with diverse palates from all over the world? Which got me thinking, was there a geographical tendency towards a certain flavor profile that Dr. Moore noticed? “No,” he responded, “there was no geographic link. People’s preferences were pretty even spread; there was a fairly clean and consistent rank ordering in the flavor profiles.”

Dr. Moore has been teaching in Scotland for five years now, but is originally from North Carolina, where he received his degree in psychology. He then went on to get a Ph.D. from Princeton, and a fellowship at Georgia. Interestingly enough, Dr. Moore doesn’t fancy himself much of a drinker, but does enjoy the occasional scotch. Proof enough, I though, that the science was sound.