Scotland’s young Isle of Raasay distillery last month unveiled its first legal single malt. Its Inaugural Release 2020 — the Isle of Raasay Single Malt — was said to have sold out in September this year. Only 7,500 bottles were made, being “snapped up by consumers and selected trade partners.”

The distillery prides itself in its ability to capture its Hebridean island home’s natural beauty in the decanter-like bottle this malt is sold in. The island’s fossils and rocks are molded into the glass. 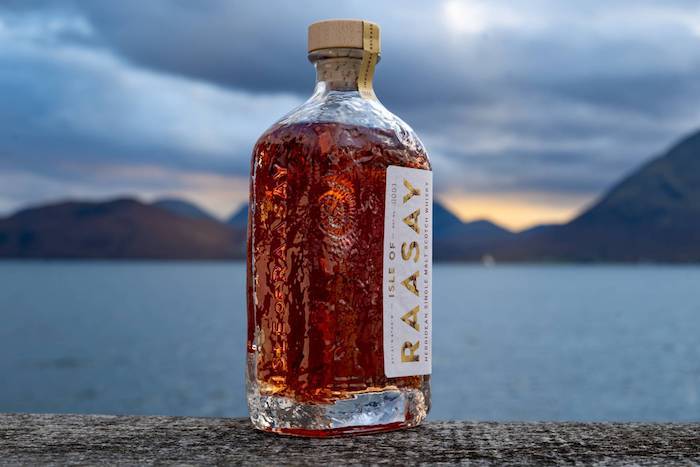 “This is a really historic moment as the first legal Isle of Raasay Single Malt leaves the island for the first time,” Alasdair Day, distillery co-founder, said at the time of its release in a prepared statement. “We are very proud of our lightly peated island single malt, and our beautiful bottle that is made with clay moulds of Raasay’s rocks and fossils. It’s like a piece of the island in your hands.”

The malt was matured in first-fill Tennessee whiskey casks and finished in first-fill Bordeaux red wine casks. It is non-chill filtered and is distilled, matured and bottled on the Isle of Raasay.

Those bottles that are still out there are available via trade partners in the UK, Germany, France, Sweden, Italy, Denmark, Switzerland, the Philippines, South Africa, Canada, South Korea, Japan and China. The distillery as well sold out of its Raasay Rising casks — the 45 Tennessee Whiskey casks used to mature this release, though other casks are available for purchase and try before you buy on their website: https://raasaydistillery.com/raasay-whisky/buy-whisky-cask/

Official tasting notes for this expression noted that “matured in first fill American oak and finished in first fill Bordeaux red wine casks – expect almond, hazelnut, and sweet spice flavours from the American oak, and caramel, toffee and creamy chocolate notes from the previous Tennessee Whiskey contents. The French oak finishing adds savoury spice flavours, and another layer of complexity and flavour from the rich dark fruit flavours of the Bordeaux red wine. “

109
Shares
16.7k
Views
Share on FacebookShare on TwitterGet Our Newsletter
Get The Glenlivet 18 Year Old at ReserveBar. Shop now!