Early in September, Richard Paterson celebrated fifty years in the Scotch whisky industry, forty-one of them as Master Blender at Whyte & Mackay. He is among the most highly respected and experienced whisky makers in the industry, often referred to simply as ‘The Nose,’ a reference to his uncanny ability to assess whiskies. His memoirs – highly recommended – are titled Goodness Nose: The Passionate Revelations of a Scotch Whisky Master Blender.

I fondly remember reading the book in proof at Changi Airport, Singapore, where was stranded overnight between Dubai and Sydney: it was as if Richard was sitting beside me.

He is a third-generation blender. His grandfather, William Robert Paterson, founded the family firm of whisky blenders and bottlers in Glasgow in 1933, and his father, Gus, carried on the business, adding whisky broking (the middle man between distillers and blenders) to blending and bottling the Paterson whiskies. One of Gus’s saying was: “A good deal depends on the broker”.

Richard recalls being was introduced to the world of whisky at the age of eight, when he and his twin brother, Russell, were taken by their father to the firm’s bonded warehouse in Glasgow and given a lesson in nosing whisky and describing its aroma.

He remembers his father saying: “Always remember to take your time when you’re nosing whisky. Never rush it. Let the spirit reveal its identity. Every sample has a story to tell.” Words that made a big impression on the boy and which he took to heart when he followed in his father’s footsteps. 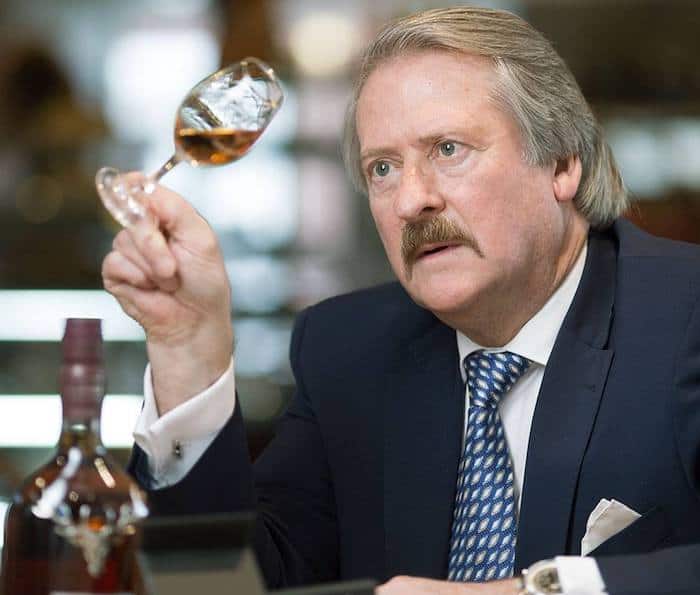 Richard Paterson doing what he does best. (image via The Dalmore)

After this auspicious early start, Paterson’s formal career in the Scotch whisky industry began in September 1966, first as an office boy (he was sixteen) then as an apprentice distiller with the Glasgow whisky firm, A. Gillies & Co., owner of Glen Scotia Distillery in Campbeltown, where Richard served his apprenticeship.

I have known Richard Paterson for over twenty years. An early encounter was on the Isle of Jura – Whyte & Mackay owns Jura Distillery – and the occasion was a press trip. The day began with a tasting, soon after breakfast. As usual, Richard was immaculately turned out – he is a famous ‘tasty dresser.’ By way of introduction, he picked up and drained a very large glass of whisky. All present gasped; we were still recovering from the night before. To this day, I don’t know whether it really was whisky or just cold tea, but the gesture epitomized the man’s style and showmanship.

When I interviewed him for this article, I began by asking him about his unique and memorable approach to presentations.

Richard Paterson: What sells whisky is passion, and I am passionate about whisky. Privately, I am very serious about my whiskies, but I don’t believe you should be over-serious when presenting them to consumers. Any presentation is to some extant an act: you are on stage and the audience wants to be entertained as well as informed. Sure, I might rinse the glass with a drop of Scotch, then chuck it on the floor. Or throw ice cubes out of the window (as you know, I don’t believe ice improves whisky, especially malt whisky). Or set off party-poppers to emphasize the ‘wow’ factor as you swallow the dram… But audiences remember these things – and hopefully also remember the whiskies that accompanied them.

Charles Maclean: You are famous for your pioneering work in relation to wood and maturation. What prompted this?

RP: Part of my job as assistant blender was to assess the quality of the whiskies we bought for blending. In 1972 I paid my very first visit to Dalmore Distillery, and since the main road north passed close to Tomatin Distillery, I arranged with the distillery’s manager, John Macdonald, to check some casks we had ordered. I expected the samples to have been drawn ready for me, but there had not been time.

It was a modern warehouse, with the casks racked ten high, so I had to climb up like a monkey to draw my samples. When I came to nosing them, I quickly became aware that they were all different, in spite of all being the same age: the flavor was influenced by where the casks were located in the warehouse – high up, where it was warmer, or low down.

I know that American distillers are acutely aware of these differences in the heat of Kentucky, but this early experience at Tomatin taught me that even in the much cooler climate of Scotland, warehouses have micro-climates.

When I was appointed Master Blender, I nosed every cask at Dalmore and Jura Distilleries – thousands of them, noting where they were situated in the warehouses. It took me about twenty years, but I then knew the casks I should hold back for bottling as single malt. You really have to get your hands dirty, not just work from the sample room. 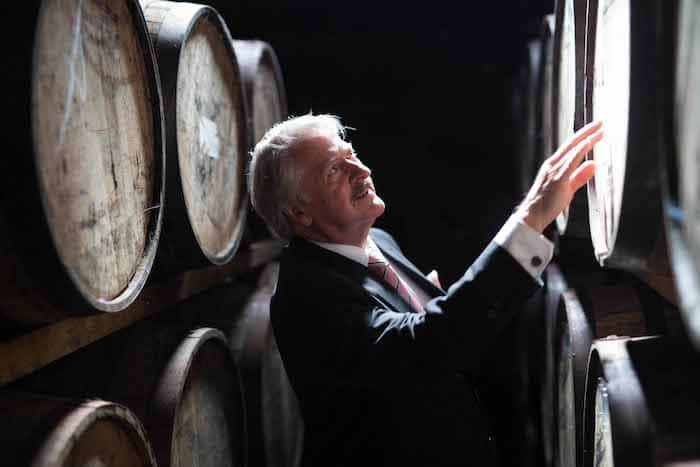 image via The Dalmore

CM: You are also a pioneer of ‘wine finishing’ – re-racking the whisky into active wine casks after initial maturation in ex-bourbon casks.

RP: Forty-odd years ago, the owners of Whyte & Mackay also owned vineyards in France, so I made a study of the subject. I became intrigued by the idea of manipulating the flaour of my malt whiskies by filling the spirit into ex-wine, port or sherry casks. I had no clear plan; I was simply experimenting. But now, when the marketing department wants new expressions of Dalmore in a hurry – which is increasingly common! – I am able to supply.

Of course, I also explored total maturation in European oak ex-wine casks, but found that they soon masked the distillery character, the original and unique flavor of the whisky. So I start of by maturing the spirit in American oak ex-bourbon casks to let the spirit settle before finishing the maturation in other casks, and I often then return the liquid to first-fill ex-bourbon casks to round off the flavor.

It’s time consuming and expensive, but it’s worth it at the end of the day.

CM: I remember tasting your first super de-luxe expression of Dalmore in your tasting room in 2002. It was 62 years old, I think.

Until quite recently, it was believed that long-aged whiskies had no appeal for consumers – one distillery owner said that after 12 years they tend to become ‘slimy’! – so they were used to bolster the flavor of blends. Also, the marketing people could not imagine that consumers or collectors would pay large sums for such whiskies, but I saw the prices being achieved by some top-end wines and said to them: “Just you wait; it will come. People will pay for rarity…”

And come it did, helped by the fact that during the economic downturn which began in 2008, whisky was seen as a good investment. As a result, prices have rocketed.

Since 2009, I have released very limited amounts of Dalmore at between 40 and 64 years old. The last, Trinitas (there were only three bottles) was the first whisky to sell for £100,000; another bottle was sold privately for £120,000. I understand that the owners of these have already received substantial offers for their bottles, but have refused them…The 62 Years Old we were just talking about was opened and drunk by a group of friends; another one has since changed hands for £125,000…