Fettercarin From Scotland Brings Forth A New 16 Year Old Whisky

The Fettercarin distillery in Scotland’s Highlands region, as we referenced a few years back, is a lesser known whisky making property owned by Whyte & Mackay, who also own the likes of The Dalmore and Jura. It was decided recently to reboot the line up, resulting in a mix of 12-, 28-, 40- and 50-year-old whiskies. Joining these now is a new 16 year old.

The new Fettercarin 16 Years Old, according to those behind it, is said to fill a space in the core line up between the 12 and 28 year old bottlings. This whisky has been distilled with chocolate malted barley and matured in first fill American ex-bourbon casks, before being finessed in select sherry and port casks for two further years. 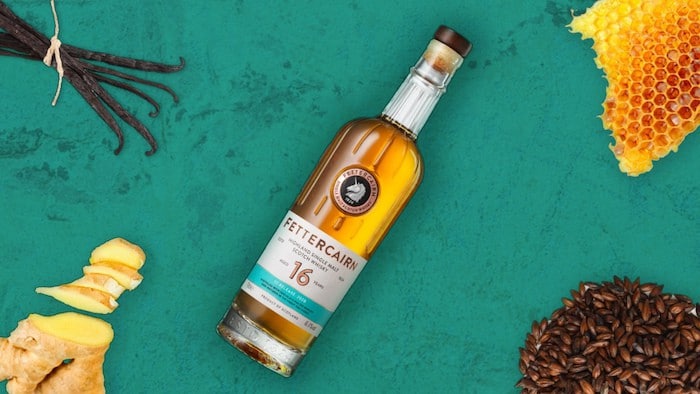 “Since we launched the new-look Fettercairn 2 years ago,” said Kirsteen Beeston, Head of International Malts at Whyte and Mackay, in a prepared statement, “we’ve talked and listened to those across the full spectrum of the whisky community to understand what they think of our whiskies.  These new releases are testament to the importance of this feedback.

“Beginning with this wonderful 16 Years Old, we share how we shape our approach to whisky making and the stories that define Fettercairn.  We are confident that we are bringing single malts to market that will truly excite whisky drinkers and allow us to celebrate Fettercairn for the incredible single malt that it is.”

Plans call for the Fettercairn 16 Years Old, bottled at 46.4% ABV, to price at £69, or around $88 USD. Official tasting notes speak of a whisky that is “sunset gold in colour, with rich harvest highlights.  On the nose, this single malt brings together vanilla and ginger with sun-kissed raisins and on the palate, it is the combination of succulent peach, ginger and caramel which gives way to banana, with chocolate and demerara sugar on the finish.”

It should be noted that the core domestic range, later this year, “will be bolstered with the addition of Fettercairn 22 Years Old, to further bridge the gap between the 12 and 28 expressions.” In addition, “at older and rarer end of the spectrum, a new Fettercairn 46 Years Old which was distilled in May 1973, continues the celebration of the distillery’s maturing stocks and showcases a whisky finished in Tawny Port Pipes.”

18
Shares
1.9k
Views
Share on FacebookShare on TwitterGet Our Newsletter
Cheers to the Dads! Personalize a bottle of his favorite whiskey to create a modern gift for the modern man. Use code: FATHERSDAY20 for $20 off your next order of $100 or more at ReserveBar