The Fettercarin Distillery, for having been a bit dormant in recent years in Scotland with regards to new releases and the like, has been going through a major revamping as parent company Whyte and Mackay looks to bring it into consideration by more drinkers. We’ve seen 12-, 28-, 40- and 50-year-old whiskies announced initially last September, followed by a 16-year-old in June. Now comes word of a 22 year old joining the family.

The new Fettercarin 22 Year Old single malt whisky, according to those behind it, is matured for the full term in first fill, American ex-bourbon casks after having been distilled in what’s described as the distillery’s unique “copper cooling ring distillation process.” In it the stills are drenched with “crystal clear mountain water to ensure only the purest vapours rise to create the new make spirit.” 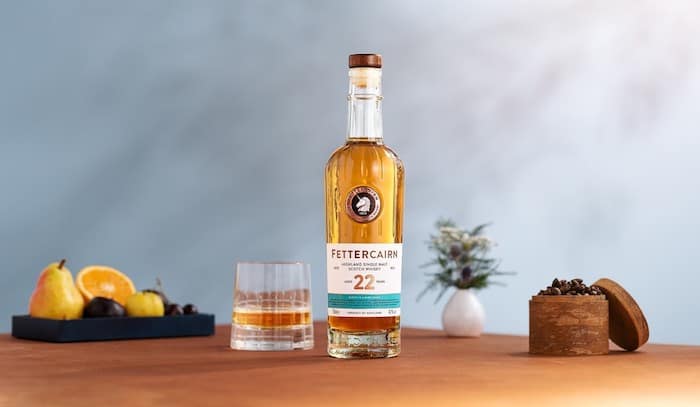 Interestingly, this Scotch was laid down in 1996 and then recask “13 years later in specially selected distillery run bourbon barrels to optimise its distinctive character development.”

“In adding a further expression to the core range, we have significantly enhanced the flavour experience on offer at Fettercairn,” said Kirsteen Beeston, Head of International Malts at Whyte and Mackay, in a prepared statement. We’ve also expanded consumer choice and demonstrated the exceptional quality of our aged stock at Fettercairn.

“Growing from four to six expressions reflects feedback we have received on the core range and the clear need to bridge the gap between the 12 and 28 Years Old. We are working hard to create a range of whiskies which honour the approach at Fettercairn, but also provide whisky drinkers with single malts showcasing the special character which sits at its heart.”

As it stands now the Fettercarin 22 Year Old, bottled at 47% ABV and both of natural color and non-chill filtered, is coming out this month globally for around £200, or about $260 USD. Some official tasting notes are below for your consideration.