Distell is a company many Americans likely don’t know anything about, but if you live in South Africa, where they are headquartered as a large spirits company, you probably have heard of them. Amongst the many holdings Distell has are the likes of several Scottish whisky distilleries, including Tobermory, Deanston and Bunnahabhain. It is from these three the parent company has announced that a range of new limited edition expressions are being unveiled.

These eight new single malts, according to those behind it, herald from four brands (Tobermory includes the Ledaig label) and range across different cask types and ages. To begin with, “the artisan Tobermory Distillery on the island of Mull, known for its ties to art in nature and colourful island influences, has revealed three vibrant new expressions. First off is the Tobermory 2007 Port Pipe Finish (ABV 55.8%), matured first in refill hogsheads before transferring to Port Pipes for its final four years, followed by two of the distilleries Ledaig peated expression; the Ledaig 1998 Marsala Finish (ABV 58.6%), matured for 21 years with four of those spent in Marsala wine casks, and the third and final Collectors Edition 2007 Pedro Xeminez Finish (ABV 55.5%). 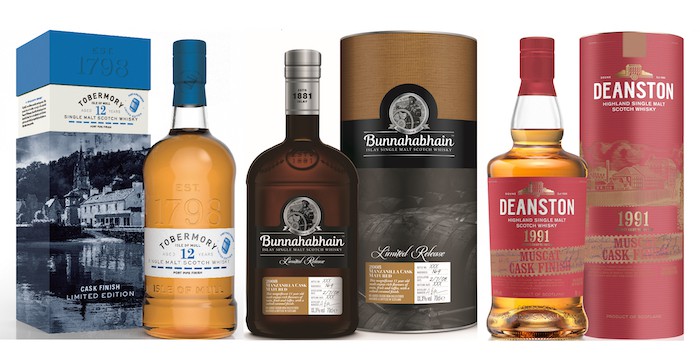 “Finally, to round off the collection, global favourite Bunnahabhain Distillery, the most northerly of the Islay distilleries, looking over the Sound of Islay, has unveiled two stunning new expressions. First is the Bunnahabhain 2008 Manzanilla Matured (ABV 55.4%), boasting a unique marriage of coastal infused flavours after carefully maturing in former Manzanilla sherry casks for 11 years, alongside the Bunnahabhain Moine 1997 Pedro Ximenez Finish (ABV 50%), – a peppery peated cask-strength single malt.

“All of the new expressions are natural in colour and non-chill filtered so their full flavours can be enjoyed as nature intended.”

“Our annual collection of limited-editions always bring the distillery team’s talent and craft to the forefront,” said Julieann Fernandez, Master Blender at Distell, in a prepared statement, “with unique takes on our beloved core classics. And this year’s expressions are truly special.

“Having been slumbering away in their casks at our distilleries around Scotland, these stunning malts are finally ready for our loyal fans to experience them. With a combined age of nearly 150 years across the eight expressions, we’ve been waiting a very long time to hear what you think.”

Pricing information for the releases was not immediately available, and it is said all these limited-edition bottlings will be available for purchase worldwide.