A prepared statement from Douglas Laing says The Epicurean’s fourth and fifth single cask releases are bottled at 96 proof without chill-filtration. The natural color of the spirit in each edition has been imparted by the Ruby Port or Tawny Port seasoned single cask used for maturing the exclusive Lowland Malt.

With this series, The Epicurean looks to demonstrate that flavor is created throughout the whisky-making process, but most significantly during the interaction between the spirit and the wood when it is in the oak cask. 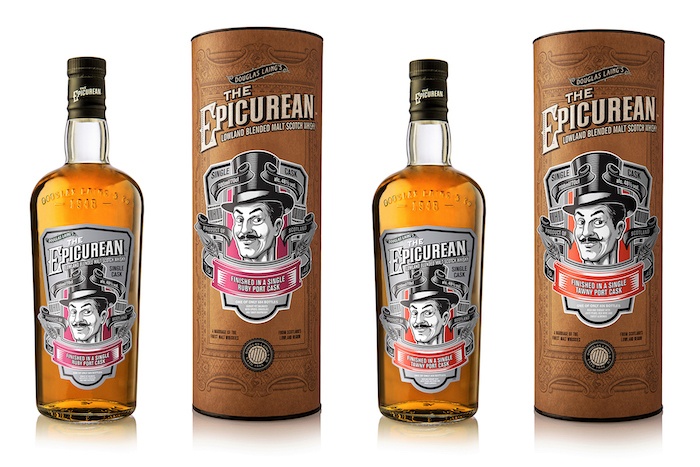 For both bottlings, The Epicurean was first matured in premium American oak before being re-racked into a hand-selected Ruby Port single cask or Tawny Port single cask for a second maturation period of more than 12 months. The result is described as a full-bodied malt with layers of complexity and character.

Both the Ruby Port cask and Tawny Port cask originate from the Douro Valley in northern Portugal, a UNESCO World Heritage Site and one of the oldest demarcated wine regions in the world.

Cara Laing, director of whisky for Douglas Laing, said, “The Epicurean is a master of versatility, its wonderfully fresh and vibrant Lowland character lends itself beautifully to experimentation with different wood finishes. The deep color presented in each of these releases speaks for the intense flavor of the spirit.”

She said the Ruby Port Finish boasts what she feels is an explosion of flavors including spices, milk chocolate and tangy raspberries; and The Tawny Port Finish embodies the vibrant taste of juicy pears, red wine and sweet almonds.

“We are delighted with the result of these bottlings and can’t wait to innovate with the next release in The Epicurean Wood Series,” she added.

Douglas Laing & Co. is an independent Scotch Whisky distiller, blender and bottler specializing in the selection and release of single cask single and small batch malt Scotch whiskies. It was founded by Fred Douglas Laing in 1948 and is still owned and run by the Laing family – Fred Laing Jr and his daughter Cara Laing.