Independent Scotch whisky bottler Douglas Laing & Co. is known for specializing in the selection and release of single cask single and small batch malt whiskies. Around since 1948, it is a family run affair since its beginnings and aims to bottle whisky the way the distiller intended. They have a range of line ups to choose from, including their Epicurean expressions, which focus on spirit from Scotland’s Lowland region.

It is from the Epicurean series they’ve been producing some bottlings showcasing the impact a cask can have on the whisky. For the second such release they’ve debuted a Scotch finished in Cognac casks. 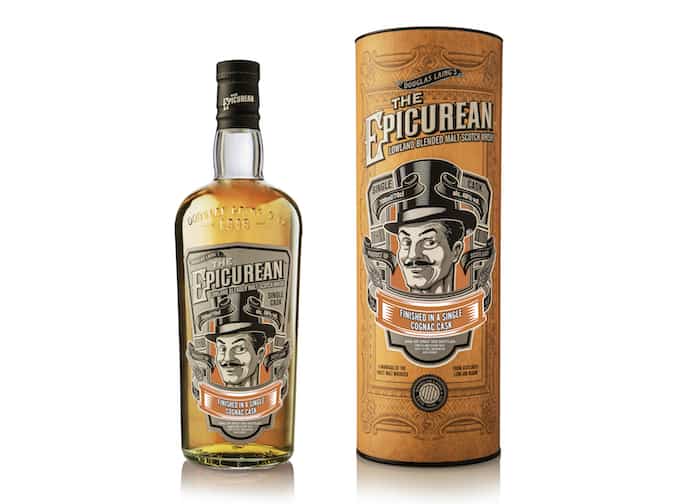 The new The Epicurean Cognac Finished Limited Edition, according to those behind it, is bottled at 48% ABV and offered without chill-filtration. It has a 100% natural, golden color in the spirit said to be the result of its time in the Cognac-seasoned single cask. There was no immediate mention of age.

“After many trials, blind tasting and careful planning,” said Chris Leggat, Douglas Laing’s Managing Director, in a prepared statement, “the casks selected for this experiment were the perfect representation of a 5-star Cognac cask. We’ve paired with our Epicurean Lowland Malt Whisky to produce this resulting limited edition: A rather exciting – certainly distinguished – addition to the family.”

“We continue to seek to open up the world of Scotch Whisky to new audiences and offer innovative experiences – our Epicurean Malt is best placed to do this,” added Cara Laing, Douglas Laing’s Director of Whisky. “The core expression is fresh and zesty yet very light in style, accordingly the spirit lends itself exceptionally well to experimentation – be that in cocktails, or indeed with unique cask finishes, such as this latest release.”

Only two single casks of this Scotch have been released, being made available for around £60, or about $75 USD. Limited official tasting notes speak of an “overriding tropical style with lychee, fiery ginger, sandalwood and coconut as a result of the finishing in two specially selected French Cognac casks.”