Spirits giant Diageo is easily considered one of the preeminent players in Scotch whisky, given the number of distilleries in Scotland it owns. Those at this company also recognize an increasing number of consumers are taking whisky holidays to explore their favorite brands more in depth, and that these visitors will be wanting enhanced experiences at the whisky making facilities. It is to this end a planned £150 million investment (over $204 million) in better whisky tourism is set to take place.

What’s being called the biggest concentrated program ever seen in Scotland’s whisky tourism sector will be ongoing over the next three years, according to those behind it. The centerpiece of this countrywide process will be a new, state of the art Johnnie Walker immersive experience that’s based out of Edinburgh. Whisky from Diageo’s distilleries all over Scotland contribute to Walker, but four distilleries – Glenkinchie, Cardhu, Caol Ila and Clynelish – will be linked directly to the venue, representing the ‘four corners of Scotland’ and the regional flavor variations of Lowland (Glenkinchie), Speyside (Cardhu), Island (Caol Ila) and Highland (Clynelish) crucial to the art of whisky blending. 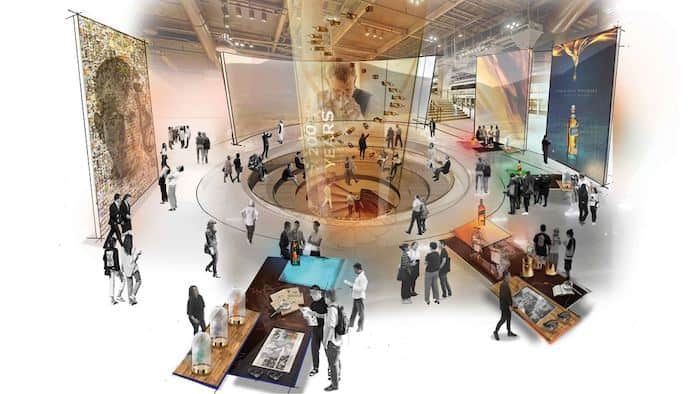 An artist impression of part of the planned Johnnie Walker experience in Edinburgh.

Diageo also will upgrade its existing network of 12 distillery visitor centers (Glenkinchie, Cardhu, Caol Ila, Clynelish, Lagavulin, Talisker, Glen Ord, Oban, Dalwhinnie, Blair Athol, Cragganmore and Royal Lochnagar) to create a new generation of Scotch attractions where people can meet the craftsmen and craftswomen who make their favorite Scotches. This is on top of already existing plan to re-open the ‘lost distilleries’ of Port Ellen and Brora, taking Diageo’s network of distilleries with specialist visitor experiences in Scotland to 14.

“Scotch is at the heart of Diageo,” said Diageo chief executive, Ivan Menezes, in a prepared statement, “and this new investment reinforces our ongoing commitment to growing our Scotch whisky brands and supporting Scotland’s tourism industry. For decades to come our distilleries will play a big role in attracting more international visitors to Scotland. I am also delighted we will be able to bring our knowledge and expertise to help the next generation, through mentor programmes and skills training.”

Now, if you ever wondered exactly how deeply Diageo is dug into the Scotch whisky world, consider these factors: