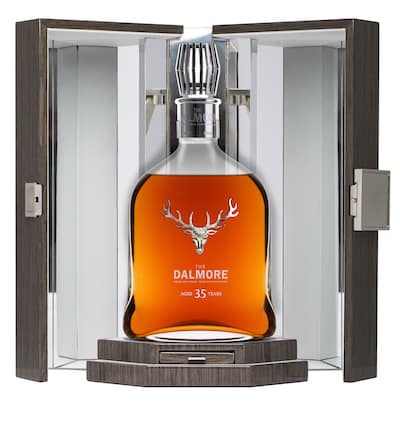 Yup, you can pretty much leave it to The Dalmore distillery, helmed by legendary Scotch whisky master distiller Richard Patterson, to go directly after the more affluent drinkers with a good portion of their range of expressions. The latest case in point on this is the just announced Dalmore 35-Year-Old, housed in a super special Baccarat crystal bottle.

The Dalmore 35-Year-Old, according to the distillery, has been crafted by Patterson and heralds from three wood profiles which include “a  distillery run Bourbon barrel, a Matusalem Sherry Butt and a Port Colheita Pipe.” Plans call for it to be released, according to Just-Drinks, at a price point of a little over $4,000 a bottle. No specific ABV was mentioned.

This release, as pointed out earlier, comes in a Baccarat bespoke crystal decanter. The French crystal house behind this bottle is no slouch when it comes to quality craftsmen working for them, as its people train for some 15 years before they are allowed to undertake such a creation. As part of the decanter’s design, Dalmore’s familiar “12-point Royal Stag” has been included on it courtesy of design work from some Scottish silversmiths.

“You cannot rush the whisky, you must take time to ensure that you get the best possible results,” said Patterson in a prepared statement. “It took careful maturation in three different woods over a 35 year period to release the full potential of this whisky.  Only after this long period of time did the whisky finally become everything I envisaged it could be. Only then was it finally time to release this truly captivating whisky from its slumber.”