The Scotch Whisky Association recently announced three bottles of a limited edition blended Scotch whisky, created for the COP26 conference in Glasgow, are currently on auction to support environmental causes.

The SWA has partnered with Whisky Auctioneer to these bottles of the COP26 blend to support three Scottish charities which focus on caring for the planet – the RSPB, Scottish Wildlife Trust and John Muir Trust. The funds raised by the auction will be divided evenly between the charities at the end of the year.

The COP26 limited edition blended Scotch whisky was created by the industry to mark November’s United Nation’s 26th Conference of the Parties in Glasgow. It has just 900 bottles made, composed of whiskies from 26 distilleries throughout Scotland’s five whisky regions. 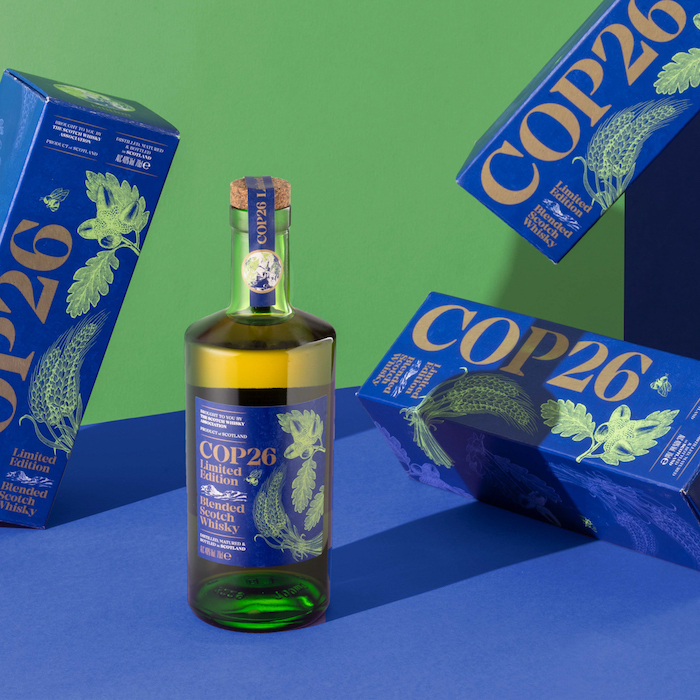 The packaging is made of 97% glass, the stopper made from recycled wood and cork dust, and a label created from bi-products of the whisky production process, including barley. The carton is made of 100% recycled cardboard.

The auction is currently running through Dec. 6 from the Whisky Auctioneer website, and comes after the SWA revealed new data showing the industry’s latest progress towards key sustainability targets since launching its first Environmental Strategy in 2009.

During COP26, the limited edition blended whisky was served to delegates at events which included the conference’s opening gala at Kelvingrove Gallery, a UK Government Scotland Office reception, the Scottish Government’s Edinburgh Castle event and a roundtable event run by the United Nation’s Climate Champions Race to Zero team.

“COP26 in Glasgow has been a great opportunity for the Scotch Whisky industry to engage with governments and other partners on how we are working towards reaching net zero by 2040, as well as meeting our other environmental targets including on water efficiency, packaging and caring for the land,” Karen Betts, Chief Executive of the Scotch Whisky Association said in a prepared statement. “Our limited edition blended COP26 Whisky serves as an illustration of how distillers have come together to fulfil our responsibility to ensure that Scotch Whisky has a future as rich as its past.”