The distillers at Mossburn explained that Caisteal Chamuis 12 Year Old Blended and Caisteal Chamuis Blended Malt Scotch Whisky pay tribute to Hebridean life and lore, and they’re meant to evoke a world of peat fires, lively company, and the misty sea breezes rolling over the Western Isles of Scotland. 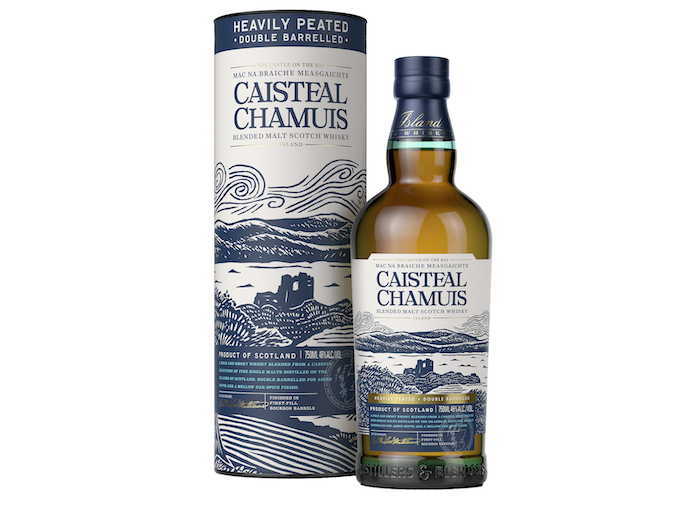 The new expressions’ namesake, Caisteal Chamuis, lies on the headland of the eastern flank of Knock Bay, on the Isle of Skye. The once strategic stronghold helped Clan Macleod secure their hold over part of the Sleat peninsula on Skye, and is visible from Mossburn Distiller’s new distillery, Torabhaig.

Last occupied nearly 400 years ago, the first elements of the castle were torn down in the 13th century on the site of an Iron Age fort known as Dun Thorabhaig. The ruins remain a testament to the storied heritage of the Isle of Skye and treat thousands of tourists a year to Scottish history and lore.

Rick Bennett-Baggs at Mossburn Distillers said in a prepared statement that in Caisteal Chamui, they’ve created a “mystifying whisky from the Hebrides, celebrating the life and lore of a past that might have been at the castle. While the story may be mysterious, enjoying a good quality, peated malt whisky shouldn’t be, as we seek to transport drinkers and welcome them to the misty isles of the Hebrides.”

More official information on each can be found below.