Editor’s Note: This month our Scotch Whisky Editor at Large Joe Micallef tackled the huge task of reviewing the Octomore series of ultra-peaty whiskies from Bruichladdich. In part one of our three part series, he talks about the distillery itself and its history of making great Scotch.

The Bruichladdich (brook-laddy) is an iconic distillery on the island of Islay (eye-lah). The island, famous for its distinctive peat smoke infused whiskies, is home to eight distilleries, including a number (like Lagavulin, Laphroaig, and Bowmore) whose illustrious histories are part of the folklore of Scotch whisky.

The distillery was constructed in 1881, at the peak of the Phylloxera-induced late nineteenth century whisky boom, by William, John and Robert Harvey. The three brothers, already established distillers from Glasgow, owned the Yoker and Dundashill distilleries. William Harvey would run Bruichladdich until his death in 1936.

When Bruichladdich was built it was considered state-of-the-art, a far cry from the other farmhouse-based distilleries on Islay. Most of those had evolved from the original illicit distilleries that had sprung up on the island in the seventeenth and eighteenth centuries. 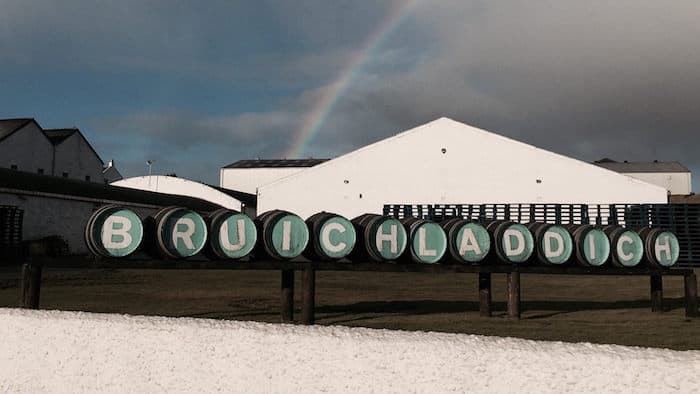 The distillery boasted two (increased to four in 1975) uncharacteristically tall (for Islay) 21-foot, narrow-necked stills. The necks of the stills were 13 feet tall, while the pots were eight feet in height. Its whisky was much lighter and lacked the overt peatiness of its Islay neighbors. Ironically, more than a century later, it would produce the most heavily peated Scotch whiskies ever imagined.

Over the course of the twentieth century, the distillery changed hands many times as the Scotch industry went through an extensive rationalization of production and ownership. It eventually ended up part of Invergordon Distillers. Whyte and Mackay, then part of Jim Beam Brands, bought Invergordon in 1993. The distillery was mothballed in 1995.

The modern era of the Bruichladdich distillery began on December 19, 2000, when a group of 50 Scottish investors, organized by Mark Reynier, purchased the property for 6.5 million pounds sterling. Reynier was a London-based wine merchant who had been dabbling in the whisky trade. In addition to the distillery, the purchasers also took possession of about 1.4 million liters of whisky, the oldest dating back to 1964.

Between January and May of 2001, the equipment in the distillery was dismantled, cleaned, and reassembled, ready to commence operations. Most of the original Victorian-era equipment was retained, including the original stills and the open, seven ton wooden mash tuns. There are six washbacks with a capacity of 210,000 liters constructed of “Oregon pine,” the Scottish term for Douglas fir.

Unlike many distilleries, Bruichladdich does not utilize any automated or computer controlled production processes. It is a true “artisan” operation, with production decisions made by skilled craftsmen relying on their own subjective assessment of the spirit being produced. All of the barley used is sourced in Scotland, with a notable portion, for the first time since World War I, grown on Islay itself. The barley is malted at Bairds Malt in Inverness using traditional Saladin boxes.

Most significantly, Reynier persuaded Jim McEwan, the longtime distiller of Bowmore, to join Bruichladdich as the master distiller and production director. McEwan, a whisky celebrity, would go on to become the distillery’s highly regarded public face and a prime inspiration for its innovative Scotch whisky expressions. Stuart Rivans documented the revival of Bruichladdich is his excellent book, Whisky Dream: Waking a Giant. Remy Cointreau purchased the distillery on July 23, 2012, for the sum of 58 million pounds sterling.

Bruichladdich installed eight webcams in 2001, which continuously stream video of the distilleries operations. Shortly after they were installed, officials at the Pentagon mistook the video feed as evidence of an Iraqi chemical weapons facility producing weapons of mass destruction. A subsequent investigation cleared the distillery, although to the uninitiated, its Octomore offerings could certainly be mistaken as a weapon of mass destruction. The distillery commemorated the incident with a special bottling of whisky labeled WMD. 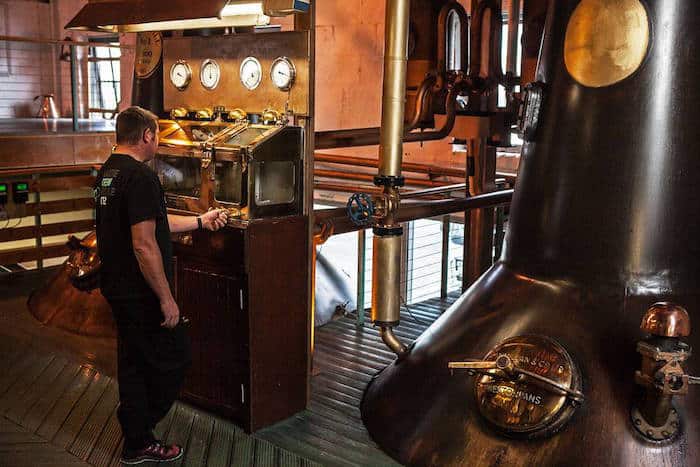 Distilling some Octomore (image via Bruichladdich)

The current capacity of the distillery is 1.5 million liters of pure alcohol. There are two wash stills with a capacity of 12,000 liters each, and two spirit stills, each with a capacity of 11,000 liters. New make spirit is collected at an average of 70% ABV. The distillery uses water from three separate sources. The water used in the mash tun is drawn from the Bruichladdich loch, in the hills behind the distillery. The water that cools the condensers comes from the adjacent “burn,” a small river fed by Bruichladdich’s own An Torran reservoir. The water that it uses to bring its whisky from cask strength to bottling strength comes from an ancient spring on a local farm.

The farm was the site of a distillery called Octomore, which closed in 1852. The same name that was used for Bruichladdich’s super-heavily peated whisky offering. The spring emerges from an ancient formation of gneiss, a complex metamorphic rock. This particular formation is, geologically, the second oldest rock in Europe, dating back several billion years. It produces a clean, soft, water with low mineralization, and provides the theme for Bruichladdich Rocks, one of the distiller’s most popular whiskies.

The spring is sometimes referred to as Octomore spring. Mark Reynier nicknamed it Dirty Dotty’s spring, because, rumor has it, he found the Gaelic name unpronounceable. The distillery has been trying to kill the use of that name ever since, but has had little success in doing so.

Unlike the typical industry practice, Bruichladdich used to supply the water used to dilute the whisky to its bottler in Glasgow. Since 2003, Bruichladdich has been doing its own bottling onsite, making it the only distiller on Islay doing so. No chill filtration, colorization or homogenization is used.

The distillery’s whisky expressions are organized into three different brands. The original Bruichladdich bottlings are low peated expressions. They started at 10 ppm, later reduced to between 2 and 5 ppm, true to the distillery’s historic traditions. These feature 10 YO, 15 YO and 20 YO offerings, although there are younger expressions, with a particular emphasis on local characteristics or “terroir.”

These local elements include different varieties of locally produced barley, including bottlings of Bere barley, an ancient variety that goes back to Viking days. According to the distillery, they have been able to identify different qualities in the same variety of barley grown in Black Isle, Lothians and Aberdeen. There were also a number of expressions of quadruple-distilled whiskies including the Feis Ile 2014 Octomore Discovery.

Shortly after it re-commenced operations in 2006, the distillery introduced the heavily peated Port Charlotte range, named after one of Islay’s villages. At a concentration of 40 ppm/phenol, this 5 YO whisky boasted a level of peating comparable to that of Islay’s most famous peat expressions: Lagavulin and Laphroaig. The whisky was aged in various combinations of ex-bourbon, previously used European, and new oak casks.

It was the Octomore range of super-heavily peated whiskies introduced in 2008, however, which brought Bruichladdich into the undiscovered country of “peat monsters.” The initial offering was peated at an astonishing concentration of 131 ppm. Subsequent bottlings, such as Octomore 6.2, reached an unimaginable concentration of 258 ppm. The distillery currently is aging a spirit malted to around 300 ppm phenol. Interestingly enough, the peat used to produce “peat reek” in Octomore doesn’t come from Islay, it comes from a peat bog in the Black Isle on mainland Scotland. Atmospheric conditions seems to determine the amount of peating that each batch of malt can absorb.

These bottlings helped create a new category of super heavy peated whiskies and established the Octomore range as the preeminent expressions of the super heavy peated style. Although not for everyone, and very much a niche category, this style of Scotch was one of the most important whisky innovations of the 21st century. Even if your preference does not lean towards “peat monsters”, Bruichladdich’s Octomores are worth trying, at least once, and savoring for the astonishing complexity and nuance that they can present.

507
Shares
903
Views
Share on FacebookShare on TwitterGet Our Newsletter
Get The Glenlivet 18 Year Old at ReserveBar. Shop now!