Lovers worldwide of sherry cask influenced Scotch single malt whisky likely know of the Glendronach distillery. It is, quite simply, one of the best whisky making outfits in Scotland to reflect this type of cask aging. Founded back in the early 1800s, it has seen all the usual ups and downs most of the whisky industry in that region of the world experienced, including a period of being mothballed in the mid-1990s. It has also changed ownership multiple times, finally settling in the hands of American whiskey company Brown-Forman back in 2016.

Brown-Forman, in deciding how to best manage the inventory at this distillery as well as that of others that came along in the acquisition, turned to accomplished master blender Rachel Barrie to helm things there just a little over two years ago. In that time she’s come to know the casks aging in the Glendronach warehouses quite well. We recently had the chance to catch up with her over the phone to find out what it is like to work and play in this sherry head’s Shangri-La. Note this interview has been edited for brevity and clarity. 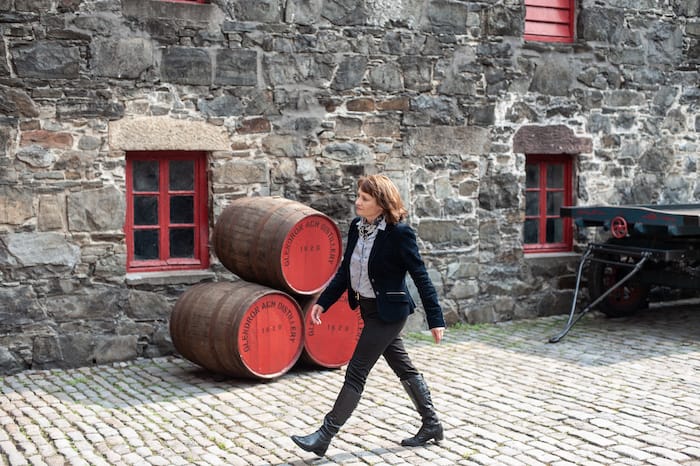 The Whiskey Wash (TWW): Tell us a little bit about your background with Brown-Forman and specifically how you became a caretaker for GlenDronach.

Rachel Barrie: I moved into the role 1st of March 2017. That’s [a little over] two years again now. Been in this trade for 25 years at that point, having worked with Brown-Forman probably about 10 to 15 years before, as well. I was approached for the role and got the job, fortunately. Now, obviously I look after GlenDronach, and BenRiach, and Glenglassaugh in terms of the wood, the cask selections, the spirit quality, and the inventory management side of the business.

TWW: GlenDronach, in particular, had you visited the distillery prior to taking the position?

Barrie: Yes, I did. Also, I’m from that area anyway. I was born [a short distance] from there and brought up in that area, so I was very aware of that distillery and it’s my dad’s favorite distillery. He still lives [not far away from] the distillery.

TWW: When you took the position on for Brown-Forman, particularly [with regards to] GlenDronach, what was it like for you setting foot on the grounds of that distillery for the first time in that new role?

Barrie: It was like going home, for me, because coming from that area, all the smells, the feel, everything. It’s the closest, really, I’ve got to being at home where I was born and bred and where all my family comes from. I either knew people there or I had friends who knew the people working there. I could just smell the whisky in the air, and I just knew that I had to work with the pinnacle of malt whisky.

TWW: When you came to GlenDronach, what was the state of the inventory there?

Barrie: The company had been focusing on sherry cask maturation for quite a few years and had been building an inventory in the finest sherry casks made with Spanish oak. The opportunity was really to build on that legacy, and the past, and make it even better in the future. That was my task. GlenDronach is, from what I’ve seen, one of the best places to mature Scotch. Its location, its atmosphere, its microclimate. Everything brings out the best in the wood for very low maturation. Very quickly I realized, “Yeah, this is a jewel. This is the jewel in the crown of all the distilleries I’ve worked with in the past.” 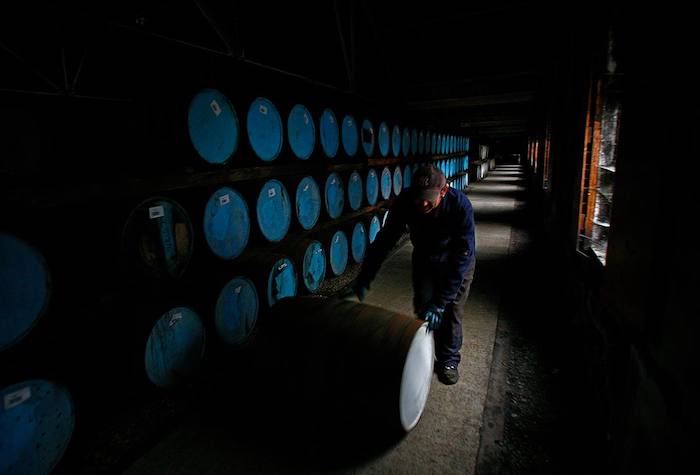 Casks aging inside a Glendronach warehouse (image via Brown-Forman)

TWW: Going into the aging warehouses there, GlenDronach has quite a bit of older stock. Just to geek out for a moment, what’s the oldest barrel you’ve tasted from?

Barrie: 1968. That’s the oldest one I’ve tasted from. There are no words to describe it. Everything. It’s everything. You just taste so much character. I think that’s it. Single malt of character, of experience, and so many layers. But at the same time, so mellow and soft and rich. Yeah. I mean, how to describe it? Oh, my goodness. It’s the greatest concentration of flavor and malt that I have ever experienced. Everything from the top notes to the deepest notes, all fused together so intricately.

TWW: GlenDronach is known as being a distillery that has a heavy emphasis on sherry cask aging for the Scotch. Are we talking about multiple types of sherry cask, or is there a particular focus on one sherry style?

Barrie: There’s a particular focus on two sherry styles. We do have a few other sherry styles in the warehouse and also some port, so there is variety in there. But GlenDronach has four main facets to its character, if I can simplify it, which [we need to do] because it’s so complex. It’s very robust coming from the eastern Highlands. It’s very fruity, as well, near the brambles, et cetera. It’s very elegant, as well, and full-bodied. Really, the different types of casks bring out the different facets. For example, an Oloroso cask will bring out the robust notes and also the full-bodied depth. PX casks tend to bring out more of the fruit and the spice, and also an elegance, as well, because it’s very sweet, but also very elegant. I find that with each expression, actually, using both leads to a greater complexity and depth and richness of taste.

Obviously, individual casks you can look at, which are spectacular, of one or the other, but I find that combination [the best], because GlenDronach has this duality to it of the dark fruit and then also the deeper, more robust leather and tobacco notes. [In general] we have a predominance of Pedro Ximenez and Oloroso. I mean, Pedro Ximenez is a cask type which I’m particularly fond of, because it’s the king of sherry. It’s got lots going on. It’s quite clean and sweet, [with] dark fruits. That really works with GlenDronach to bring that side of GlenDronach’s [personality forward].

TWW: The casks that GlenDronach uses are now – are they sherry seasoned, sherry casks [that] had sherry in them for a long period of time or a mix?

Barrie: We have a combination. We have some very old sherry casks up to 50 years, 60 years, 70 years, even, with sherry obviously having been reused over that period. And some that have had sherry in [them] for a very long time. Then we have the seasoning, as well. It’s good to, again, get this combination, because with the seasoned oak, obviously, you’re getting a lot more from [the wood]. A lot more tannins, et cetera. Then with the older casks, they give more of a mellow, soft maturity to the whisky. 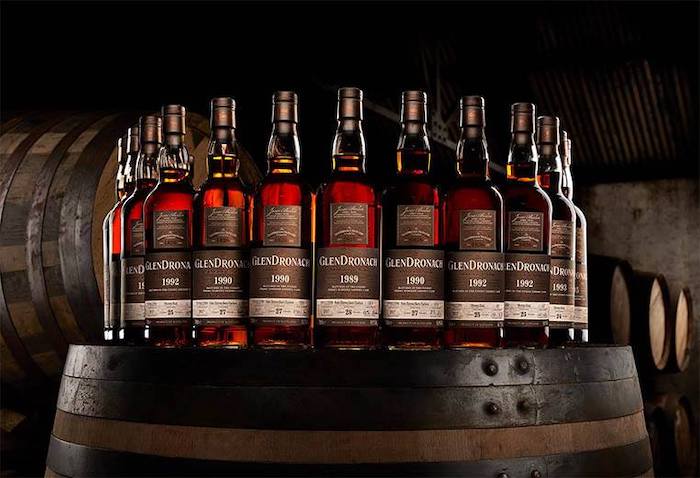 TWW: Talk about the intricacies of working with such old whisky when you’re creating either a blended single malt or trying to figure out what single cask expression to release next.

Barrie: Well the thing is, by that age, it’s like any individual, every single one is different over time. You have the nuances. You have less stock to work with, obviously, when it’s older, because most of it would have been sold as a 10, a 12-year-old expression, 18-year-old, et cetera. They’re all good, and they’re all rich. It’s quite incredible how it just keeps getting better, and better, and richer and richer.

With blending, I’m looking at getting some different distillation dates or different casks and creating a profile that is all the facets: robust, elegant, fruity, bull-bodied. Whereas in a single cask, you might just get one that’s just so robust, almost quite meaty and full-bodied, that it’s just great on its own, and some you want to combine.

TWW: With regards to GlenDronach today, this is a distillery that I think Americans are slowly becoming more aware of. What about the American whisky palette do you think GlenDronach will appeal to?

Barrie: I think the American palette is used to the depth of oak, for example, a richness that comes through from American oak, [and] that you have that kind of oiliness and depth and slight smokiness that comes through from the oak, as well. And also the sweetness. I think they’re ready for a step up into the richness of malt, for a start, and also into the depth of GlenDronach. I think they’re ready for it, because there’s been a lot of innovation, obviously, in the States, as well, with products made there. And also the single malt market is growing as well, for Scotch.

TWW: Among the core portfolio of GlenDronach, the 15 year old seemed to have a particular love for it from Scotch drinkers worldwide. I know the GlenDronach 15 had been discontinued, then it was brought back last year. Why do you think it’s one of the most favored age statement expressions among the different GlenDronach expressions?

Barrie: At 15 years old, in particular, it reaches a refinement. It’s a little bit different from 12 and 18. 12 is fruity and spicy, beautiful, perfect balance of all the distillery facets. Then the 15 just becomes more elegant and really clean. It’s like an after-dinner malt. It’s got a very long finish, and it’s slightly bitter sweet in a really good way, like a dark chocolate is. It’s a very silky, very fine GlenDronach, but also robust in the sherry character. It lifts, and then it lengthens, and it deepens in taste. It leaves you with a really rich, dark chocolate finish. By 18 it becomes a lot more robust and nutty, like walnut, and the tobacco really comes out, the earthiness.

TWW: Wonderful – well, thank you very much for your time. We appreciate it.