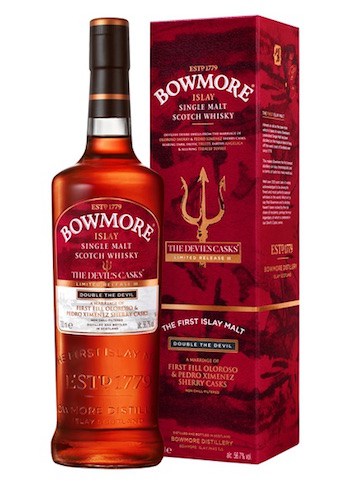 Bowmore has a new whisky for fans of sherry cask style expressions, with the release of the final part of a trilogy of similar bottlings, known as the Devil’s Casks. We covered the release of number two in this line up last year. Here’s what you need to know about Bowmore Devil’s Casks III: Double the Devil.

According to lore (at least how Bowmore spins it) this whisky gets its name “from a legend nearly as old as the distillery itself. It was claimed that the Devil was once spotted and chased through the town, eventually hiding away in the distillery. After searching, the Devil was nowhere to be seen, having made his escape in a whisky barrel.”

Now, if the devil is in the details, there’s one important detail to pay attention to around this whisky, compared to the previous releases, anyhow: there’s no age statement with this Scotch. Last year we knew Devil’s Casks II was 10 years old. There’s no reason given why Bowmore skipped on mentioning age this time around, but considering there’s a general industry trend towards non-age statements, it isn’t surprising.

Looking at what is in the bottle, age statement or otherwise, you’ll find a blend of whiskies that have been matured in both Oloroso and Pedro Ximénez sherry casks. This is what is at the heart of the Devil’s Casks series, and for the final release there’s two unique things of note: it is the first time Ximénez sherry casks have been used by the distiller, and also the first time this spirit has been double matured.

Putting all of this together, you end up with a 56.7% ABV whisky that’s deep mahogany in color, pricing at £190 ($285 USD) if you are seeking a bottle of it. This price, interestingly, is a significant jump up from last year’s roughly $100 release. If you are looking to grab a bottle to complete your series, or are an uber-fan of Bowmore, this likely won’t be an issue, but for others it may be a turn off.