Bowmore recently unveiled two new Scotch whiskies in the first release of “Bowmore No Corners to Hide,” a new collaboration between acclaimed graphic artist Frank Quitely, who has illustrated for Marvel and DC Comics, and Bowmore’s Master Blender Ron Welsh.

Inspired by the myths and legends from the island of Islay, each bottle in the collaboration features exclusive designs and artwork from Quitely. The illustrations showcase Islay’s history and rich stories of a bygone era and embody what’s described as the artistic expression of Bowmore’s style. 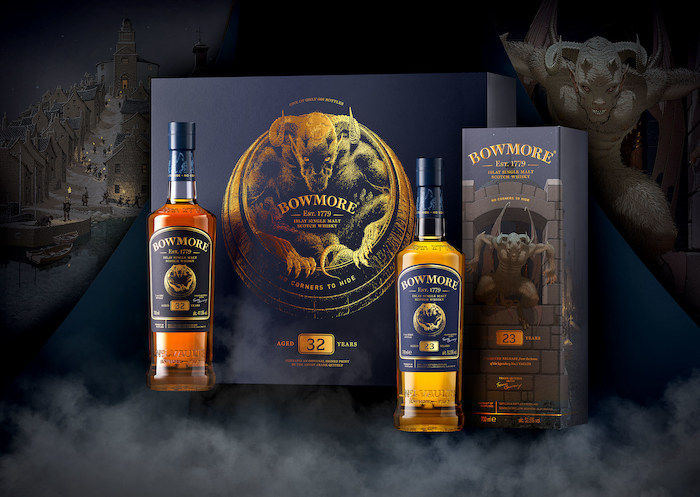 Bowmore No Corners To Hide (image via Bowmore)

The 23-Year-Old captures a whisky character described as being inspired by the story of No Corners to Hide. The spirit was nurtured in ex-bourbon American oak hogsheads to create the signature Bowmore style. Two years of further maturation followed in Essencia barriques (aromatic barrels) to create a whisky character that could reportedly conjure up a sensory exploration of this mythical tale.

The distiller’s official tasting notes show this expression captures a hint of beeswax, a scent of incense and a struck match to transport the senses to Bowmore’s round church. Each bottle is decorated with illustrations and sketches from Quitely.

The 32-Year-Old is said to capture a moment in time. An initial 30 years of maturation in ex-bourbon American oak hogsheads reflects a timely occupation in cask, much like the devil’s own alleged escape. This was followed by two further years in Essencia barriques to bring an unusually distinctive character to the fore, again combining beeswax, incense and struck match.

The distillers show the aged spirit then evolves to Seville orange peel merged with the aromas of an old cigar box, but with sweet and floral interjections and finishing with a touch of licorice and iodine. Each bottle comes complete with a signed print from Quitely, alongside original sketches and notes from the whisky making process.

Manuel González, marketing director for Beam Suntory, said in a prepared statement, “Bowmore has a rich history filled with myths and legends, and we’re delighted to partner with the award-winning Frank Quitely to bring these tales to life. Possessing a proven track record of producing collectible artwork with both Marvel and DC, the Frank Quitely Collection is our latest exciting collaboration to offer luxury limited-editions to our customers.”