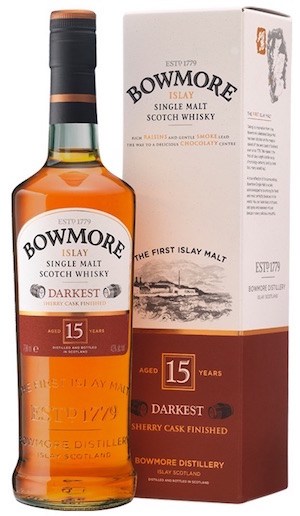 Editor’s Note: The Whiskey Wash welcomes Joseph Micallef as the newest member of our writing staff.

Smoke and sweetness seem more apt descriptors for a barbecue sauce than they do a Scotch whisky. In the case of Bowmore Darkest, however, they are right on point. The Darkest is a unique combination of Islay’s distinctive smoky, peaty, medicinal taste, and the characteristic sweetness of sherry cask finishing.

The Bowmore distillery is the oldest of the eight currently functioning distilleries on Islay, the largest island of the Inner Hebrides. It was established in 1779, and has been in continuous operation since then, except for a brief interlude during World War II. During that period, the distillery hosted the local headquarters of the Royal Air Force Coastal Command’s anti-submarine operations.

Islay, of course, has a long history of illicit distillation, which makes the question of which distillery is the oldest moot. Officially, Lagavulin, for example, dates back to 1816, but there were unlicensed distilleries operating on that site dating back to 1742.

The distillery has four stills—two wash stills and two spirit stills—and has an annual capacity of two million liters of pure alcohol. The distillery operates its own floor malting, one of only six distilleries to still do so. It is also one of the few distilleries that still use peat in its kilning operations, producing the distinctive peat reek that Islay whiskies are noted for. Neither the locally produced barley nor the floor malting are sufficient to meet the distillery’s annual requirements, so its malting operation is supplemented by already malted barley that is produced to its specifications and imported from the mainland.

The whisky is aged for 12 years in ex-bourbon casks followed by three years in Oloroso sherry casks. It was named the “Darkest” in reference to the fact that it was the darkest colored of all of the expressions produced at Bowmore. The point seems academic, though, since the whisky is colored with E-150 spirit caramel. It’s unclear to what extent its color comes from the sherry butt aging or from the use of caramel.

The Bowmore Darkest has a rich, dark amber color with a reddish orange hue. On the nose, there is smoke, peat, cedar, tar, and the medicinal iodine/phenolic notes that are characteristic of Islay whiskies. These are followed by dried stone fruit, hints of raisin, and waxy notes of linseed oil, vanilla, cooked oatmeal and tropical spices. There is a butterscotch note that gets progressively more distinct on the nose as the whisky opens up.

On the palette, there is smoke and tar backed by a candied sweetness and golden raisin notes. The Bowmore Darkest has an oily, creamy, viscous texture and the solid mouth weight that is typical of over standard proof, sherried whiskies. There is a long succession of sweet, dried fruit notes featuring apricot, peach and golden raisin, followed by creamy butterscotch in addition to a distinctive piquant peppery note with just a hint of vermouth-like herbal bitterness.

The finish is medium length and is dominated by the smoky, medicinal character typical of Islay whiskies. The sherry finish adds sweetness, dried fruit notes, and additional weight and texture to the finish. On the whole, however, the sherry notes are overshadowed by the smoke and tar of the Bowmore, leaving the whisky feeling a bit unbalanced. Oloroso sherry is subtle, and may just not have the heft to stand up to Islay’s brawny offerings. The Lagavulin Distillers Edition, which has the same idea but uses the significantly sweeter PX sherry cask, does a better job of balancing the smoky and sweet aspects of sherry finished Islay whisky.

This is an acceptable whisky. At an average price of $78 per bottle, however, it’s a trifle expensive for what it offers. The Lagavulin Distillers Edition, though costlier, offers significantly better quality, and the Talisker Distiller’s Edition offers a comparable whisky for a third lower price.