Bladnoch out of Scotland Unveils an Expensive Luxury Whisky

In this day and age, it’s not uncommon to see Scotch distilleries release high end whiskies that cost thousands of dollars and are clearly targeted towards the luxury market with some regularity. Bladnoch, the southernmost of Scotland’s whisky makers, is getting into this game now with the debut of its Bicentennial Release.

The new Bladnoch Bicentennial Release, according to those behind it, is a 29-year-old Scotch whisky priced at £5,000, or around $6,983 USD. It was created to celebrate the distillery’s 200th year of existence, which is something of a small miracle when you consider the number of times it has switched hands over the years. It is now owned by Australian entrepreneur David Prior, who has set about with a team to turn “this important piece of Scotch whisky history into a modern day distilling operation with production recommencing last year.” 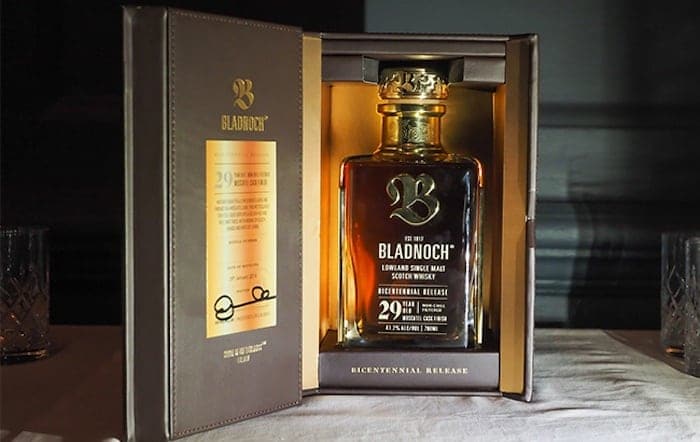 The whisky in question, bottled at 41.2% ABV, is drawn from just two casks of aging Scotch which were laid down back in 1988. They were first aged in ex-Oloroso sherry barrels, before being finished in ex-Moscatel wine casks. Only 200 bottles are being made available.

“In the last three years, we have significantly invested in Bladnoch to revive whisky production, as we strive to give Scotland’s most southerly distillery back its true title as the ‘Queen of the Lowlands,” said Prior in a prepared statement. “We may be celebrating the 200th anniversary of the distillery, but Bladnoch’s renaissance chapter is only just beginning.”

Limited official tasting notes for this Scotch, housed in a gold and glass bottle with a heavy gold stopper, indicate “chestnut gold in colour, our bicentennial release has lovely rich sherry and acacia aromas with notes of dark chocolate, sweet oak and citrus with a long and satisfying finish.”

18
Shares
264
Views
Share on FacebookShare on TwitterGet Our Newsletter
Read More Whiskey News
A Famous Painting Of Whisky Sold For Over $1.2 Million Recently
Cheers to the Dads! Personalize a bottle of his favorite whiskey to create a modern gift for the modern man. Use code: FATHERSDAY20 for $20 off your next order of $100 or more at ReserveBar