The Bowmore distillery is already a Scotch operation well regarded in most whisky circles. They put out an amazing range of bottlings, and once in awhile from the depths of their oldest vaults appear some truly rare, and very expensive, one of a kind gems. It is to this latter category we travel in this story, exploring the mystery which is Black Bowmore 50 Year Old, The Last Cask.

Black Bowmore 50 Year Old, The Last Cask, according to the distillery, is the final curtain call in its highly coveted Black Bowmore series. This line up, so named because the era it heralds from made use of a much larger portion of sherry casks that give the whisky its darker color, regularly sells high when it drops at auction. It is something I get the sense Bowmore thought around at least a bit when they laid down the price for this, as it clocks in at a staggering £16,000, or over $25,000 USD. 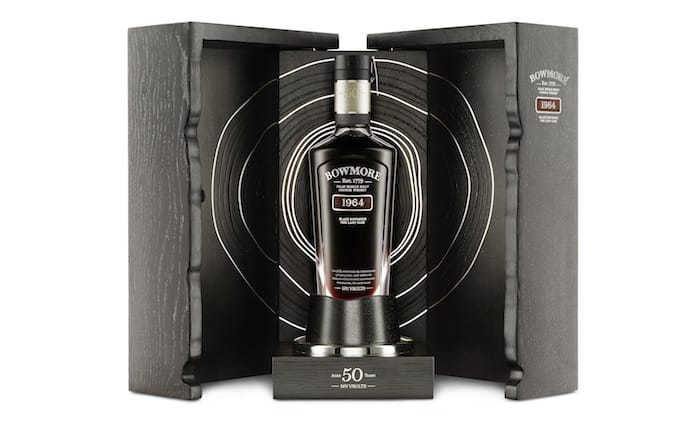 Now, while you remain floored by the price, consider why it likely is at this level. This is the last of the whisky for this series which was laid down back in 1964. Four previous very limited edition releases of it sold out quite quickly, and after the last one in 2007 what was left over supposedly ended up being forgotten about until rather recently.

Said 50 year old Bowmore is now safely hanging out inside a special bottle, which in turn is housed in a handmade cabinet. This cabinet is marked with silver contours that depict “the passing of time since the historic first distillation,” according to Bowmore. All total only 159 bottles are being made available globally for this release. Very limited official tasting notes can be found at the end of this story.

“This last cask of Black Bowmore to be rediscovered not only demonstrates the unparalleled depth and quality of our single malts but cements Bowmore as one of the world’s leading whiskies,” said Bowmore Distillery Manager, David Turner, in a prepared statement.

After 50 years of meticulous maturation in the vaults, Black Bowmore offers a sublime elegance with flavours of tropical fruit and honeyed black truffle complemented by the signature peat smoke notes of Bowmore. With its exquisite deep black pearl colour imparted from the Oloroso sherry casks that it was matured in, Black Bowmore 50 Year Old is beautifully rounded and complex and should be served and savoured neat.