The Benromach distillery, located in Scotland’s Speyside region, is said to be one of only a few distilleries in that part of the world to still use traditional methods in making whisky that don’t involve any automated machinery. They have some particularly old stock sitting around which occasionally gets released into their Heritage single cask series, such as a recently announced 1978 vintage that’s some 40 years old. 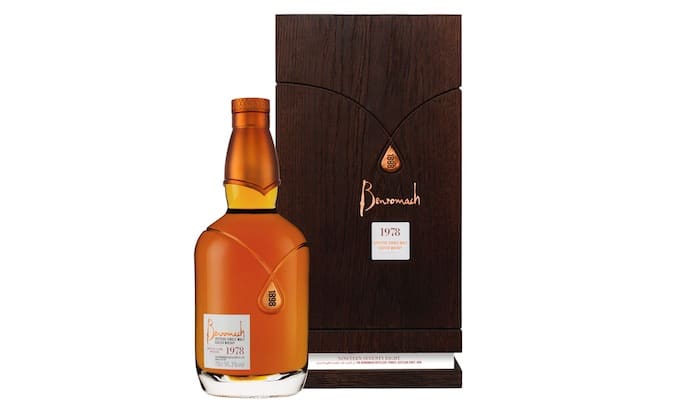 “Over the 40 years that this intriguing whisky was maturing,” said Keith Cruickshank, Benromach distillery manager, in a prepared statement, “it drew incredible depth, character and flavours from the wood. Outside the cask, the distillery was evolving and changing. After it closed in 1983, the distillery lay silent for more than 15 years before it was purchased by the Urquhart family in 1993 and reopened in 1998.”

“Our carefully chosen Heritage single cask releases give Benromach lovers the opportunity to taste moments in time from the distillery’s rich history. We are confident our 1978 vintage will surpass expectations and are proud to be releasing such a rare and precious whisky during the 20th anniversary year of distilling restarting here at Benromach.”

The 1978 bottling is presented in a decanter-style bottle with shapes and textures inspired by the distillery. The bottle has a copper-foil embossed label and is set in a dark oak wooden box, representing the original washbacks at Benromach. You’ll find some official tasting notes below for your consideration.

Take a short inhalation, appreciating the wonderful aromas without water… enjoy the rich, sweet notes of honey and vanilla, mingling with ripe fruits, tangy lime and a touch of butterscotch and fresh ginger.

Now take a sip. Savour the smooth sweetness beautifully balanced by a hint of pepper. Top notes of oak mingle with succulent pear and kiwi, rich dark chocolate and dried tobacco, with lingering spices and a wisp of peat smoke on the finish.