Benromach Offers Up Single Cask Scotches From 1977 And 1972

The Benromach distillery in Scotland has, for a bit now, been releasing decades old single cask, single malt expressions as part of its Heritage series. The last we saw from this line up was a 40 year old from 1978 that had aged inside an old refill sherry hogshead cask. Following it up now are two new offerings, each of which are older then this previous bottling. 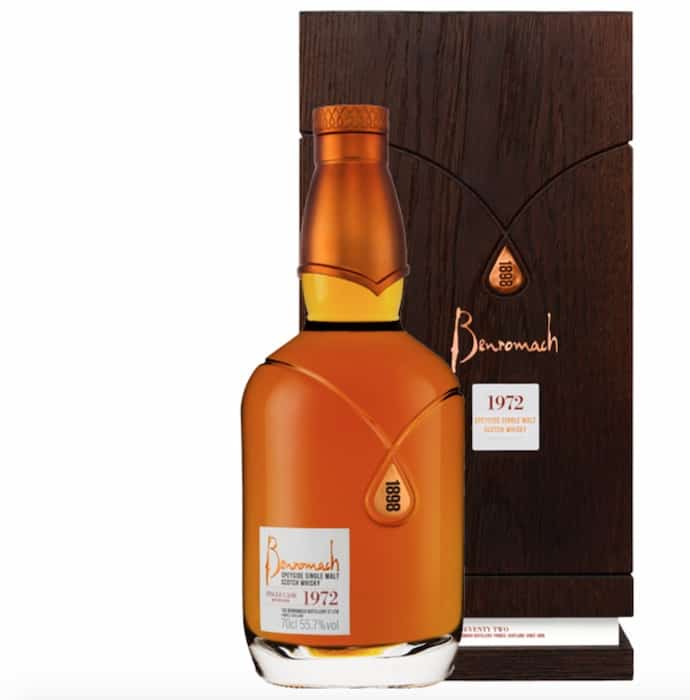 “We’re proud to build on the popularity of previous Benromach vintage releases from the 1970s with these unique single cask bottlings that represent different moments in time from the distillery’s rich history,” said Keith Cruickshank, Benromach Distillery Manager, in a prepared statement. “Through careful monitoring and regular sampling throughout the maturation process, these remarkable releases have been aged to over 40 years each. Both golden amber single malts are brimming with fruity flavours and subtle oak notes. The release of these vintage expressions is an outstanding start to an exciting year for Benromach.”

Both expressions are presented in a decanter-style bottle with shapes and textures inspired by the distillery. The bottle has a copper-foil embossed label and nestles in a dark oak wooden box, representing the original washbacks at Benromach. The copper cut medallion on the packaging is said to signify “the moment in time when the distillers cut to the sweet heart of the spirit run.”

Official tasting notes for both whiskies are as follows from the distillery. Both should be finding their way into retail now.

Benromach Heritage 1972 has a golden amber hue with a tempting nose of vanilla custard, honey and tropical fruits, with intriguing hints of mature oak and an edge of fresh menthol.