The Benromach distillery, as we noted earlier this year, is celebrating its 20th anniversary in Scotland. This special time is more tied to the whisky maker’s reopening in 1998 after lying dormant for some years prior to that. As part of this celebration a new special whisky has been unveiled that’s drawn from the first cask laid down after the stills starting producing new make spirit once again.

Benromach Cask No 1, according to those behind it, was matured in a first fill sherry butt for exactly 20 years before being bottled at a cask strength of 60.1% ABV in late August. The cask it is drawn from was apparently signed by one His Royal Highness The Duke of Rothesay, who was present to help the distillery reopen after its quiet period. It thus marks a very special moment in Benromach’s overall rather long history (it was originally built in 1898). 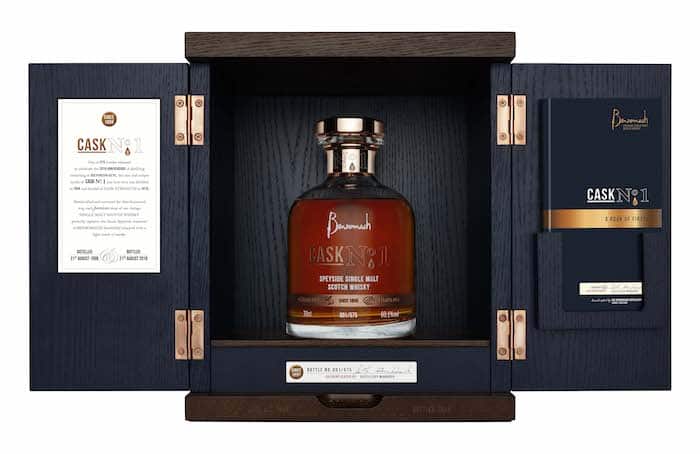 Benromach Cask No 1 (image via Benromach)

“I was proud to witness HRH The Duke of Rothesay sign the first cask of our own distilled spirit 20 years ago,” said Keith Cruickshank, Benromach Distillery Manager, in a prepared statement. “This unique single cask offers whisky lovers the chance to own, savour and share an incredibly special moment in the history of the Benromach Distillery.

“Benromach Cask No 1 is a treasured bottle and is the oldest and most exclusive whisky to be launched as part of the Classic range since the distillery was revived. Part of our Classic range of Speyside single malt scotch whiskies, it offers succulent blackberries and stewed damson plum with a hint of roasted hazelnut and charred oak on the finish.”

Plans call for the 575 bottles drawn from this single cask to be for sale exclusively through the Benromach visitor’s center for £1,000, or a little over $1,300 USD. Each special decanter is housed in a wooden presentation box sporting double doors that open to reveal the bottle. Each decanter is closed with a copper stopper, reminiscent of the distillery’s copper stills, and all of the  containers are individually numbered and accompanied by a certificate of authenticity signed by Cruickshank. A hardback book also accompanies the whisky that delves more into this expression and what Benromach is about in general.

It should be noted as well that all profits from the sale of Benromach Cask No 1 will be donated to charitable causes.