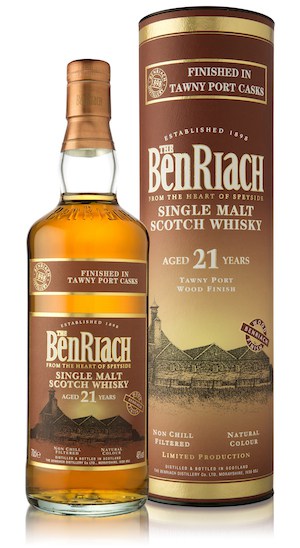 It looks like the Benriach distillery in Scotland is making some changes to its wine cask-finished lineup. Nothing super big, mind you, unless you like a little extra older whisky in the bottle. The first of these is the replacement in their core lineup of the 15-year-old Tawny Port cask finish with a 21-year-old variant of the same style.

The new Benriach 21-Year-Old Tawny Port Wood Finish, according to the distillery, is bottled at 46% ABV. Both non-chill filtered and of natural color, this whisky was first aged in traditional ex-American bourbon barrels before being finished in Tawny Port hogsheads, which were sourced from the Douro region in the north of Portugal.

“We launched our critically-acclaimed range of wood finishes ten years ago and since then the response worldwide has been consistently excellent,” said Benriach sales director Alistair Walker in a prepared statement. “At BenRiach we’ve carefully selected whisky that has been gently maturing in bourbon casks so that drinkers experience the full impact of the Tawny Port cask after it has been finished.”

It’s a phenomenal Speyside Single Malt with a tawny, fruity heart. A slight earthiness from the port is balanced with contrasting rich fruit characters and warm oak spices.”

Official tasting notes for this Scotch are at the end of this story for your consideration. There was no immediate mention of price.

Nose: A perfect balance of fresh cranberries and warm white pepper develops to a combination of tart raspberries and boiled candy.