The Balvenie DCS Compendium, as we first wrote about a few years back, is a series of one off Scotch whisky releases from this top flight Scottish distillery. Each wave of bottlings is generally snapped up pretty quickly by high end collectors with serious cash to spend. Chapter 3 is now upon us, containing in its mix the oldest whisky ever released from The Balvenie.

The Balvenie DCS Compendium, Chapter Three, according to those behind it, was created in this ongoing series to memorialize David C. Stewart MBE, the fifth and longest-serving Malt Master at the Speyside distillery. It joins what will ultimately be a run of 25 rare and vintage casks released over five years and five chapters. 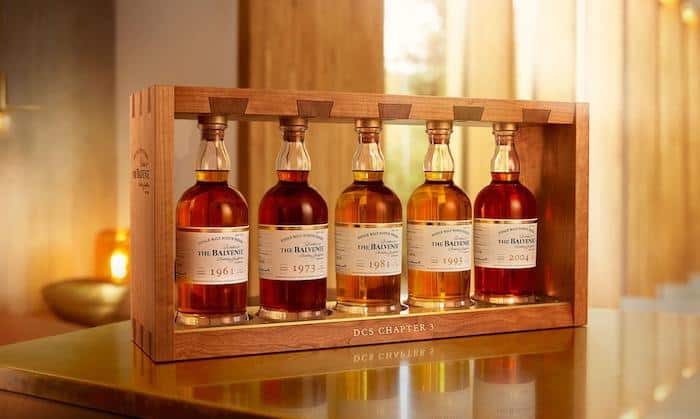 As mentioned previously, Chapter Three contains the oldest The Balvenie whisky ever released, a 55-year-old single cask whisky that was put into cask in 1961. It, like the other whiskies in this collection, is presented in a bespoke walnut and brass frame, crafted by Scottish wood craftsman Sam Chinnery, and accompanied by a book detailing each of the five DCS Compendium chapters.

With only 50 sets available worldwide, this is not obviously something most of us will get to experience. That being said, one set of DCS Chapter Three will be featured exclusively at Ty Bar at Four Seasons Hotel New York and available for connoisseurs to sample by the flight for $5,000 or individual pours of each vintage with price varying per bottle.

“As Malt Master, it is my privilege and duty to manage our whisky stocks, which we look to control despite all the elements the barrels are up against to reach maturation,” said Stewart in a prepared statement. “Through my 55-year tenure working with The Balvenie, I have come to understand the decisions we make when we originally cask, and how they will affect the company and stock models in years to come. I couldn’t be more pleased with the expressions we chose for this chapter, specifically the 1961 Single Cask, which truly encompasses my career to date serving The Balvenie.”

You’ll find more official information on each expression in Chapter 3 below for your consideration.