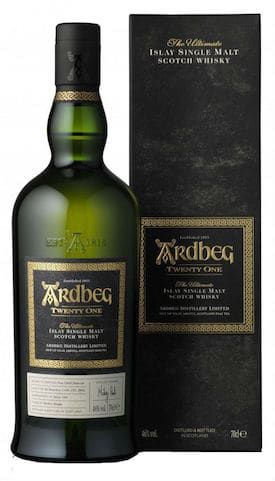 Oh, lookie. There’s a new Ardbeg coming that’s over two decades old. My, oh, my. It is a Committee (fan club) exclusive release, at least for now, which will likely quickly kick over to secondary markets at high prices. Meet the Ardbeg Twenty One, crafted for those who help keep the distillery alive and well today by buying up almost anything they produce.

Ardbeg Twenty One, as the story goes, is a 21-year-old bottling which was distilled back in the mid-1990s. At that time the Islay distillery was on life support, with its “whitewashed walls … faded and crumbling” and distilling there almost non-existent. It is said a then-young Mickey Heads, now distillery manager, “set aside a small number of casks for Ardbeg’s future – including some containing whisky distilled during those perilous days when the Distillery’s future was still uncertain.”

Fast forward to today and, in the face of a huge Scotch whisky resurgence as part of a larger global growth in whiskey interest, the so-called Ardbeg Committee is 120,000+ strong. This large, and very loyal, fan base helps to pretty much ensure Ardbeg won’t be crumbling to the ground anytime soon.

“Ardbeg Twenty One is a shining example of Ardbeg’s enduring spirit,” said Heads in a prepared statement. “I’m so pleased we can share it with our members. The Committee have invested much in ensuring the future of the Distillery and it’s only right that they should share the rewards of its turbulent past too.”

Plans call for the release of Ardbeg Twenty One, which is non-chill filtered and bottled at 46% ABV, on October 1st (formerly September 21st) for a price of £310 (about $410 USD) to Committee members through the Ardbeg website. As we learn more about buying specifics, we will update this story with details.

0
Shares
974
Views
Share on FacebookShare on TwitterGet Our Newsletter
Get Jefferson's Ocean at ReserveBar. Shop now!