Arrrrrrrdbeg! is the distillery’s first whiskey wholly matured in ex-rye casks, allowing for what’s described as a unique and significant flavor palate. On the nose, gunpowder, smoked banana and pear drift into vanilla and rye, before a taste of fruity flavors, aniseed and a hint of sourdough bread lead into a long finish of gentle smoke. 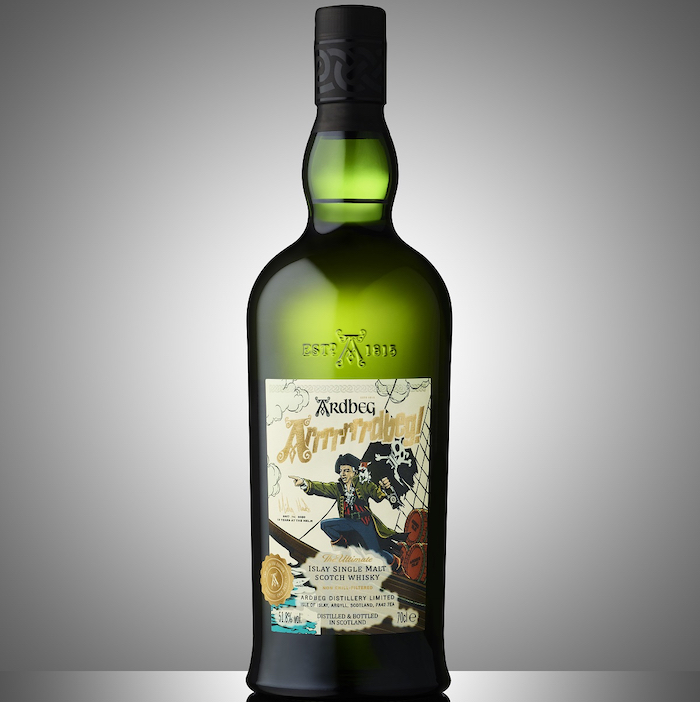 Created by renowned Brazilian artist and graphic designer Butcher Billy, the bottle’s label illustrates Heads as a pirate with a pup on his shoulder as he looks onward towards his next adventure with his own bottle of the new release in hand.

Heads started at the company in 2007 and during his time, oversaw the distillation of dozens of Ardbeg expressions. He attended various celebrations for the company and even took home the title of IWC ‘Distillery of the Year’ three years in a row, as well as being named Distillery Manager of the Year in 2014.

“Working with Mickey has been an absolute joy,” Director of Whiskey Creation Dr. Bill Lumsden said in a prepared statement. “He’s somebody with a genuine passion for Ardbeg and we hope that this bottling will take pride of place in his collection. He’s presided over many momentous Ardbegs over the years, but this ‘end of an era’ edition is a special one.”

“It was an absolute pleasure to spend the last 13 years heading the crew at the greatest Distillery on earth,” added Heads. “I had the best team of people anyone could wish for and I’m proud that we’ve been responsible for producing so many wonderful Ardbegs along the way. As for this bottling, well I’m honored that a place that has already given me so much would celebrate my retirement in such a thoughtful way. And to have my image on a bottle, that’s a dream come true!”