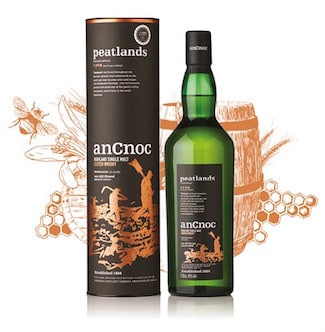 The anCnoc Scotch whisky brand, housed in Scotland’s Knockdhu distillery, has debuted a fifth expression of a line of peated whiskies it first unveiled about a year and a half ago. The bottlings in this line have ranged in ppm from 11.0 ppm to upwards of 20.5. The new Peatlands, by contrast, clocks in lower then all of these at just 9 ppm, resulting in a whisky that has a more “delicate and gentle finish.”

anCnoc Peatlands, bottled at 46% ABV, is limited in distribution to Scandinavia, Western and Eastern Europe, with just 6,600 bottles available for purchase. It is named after areas in Scotland where peat is found, which typically includes “throughout the Scottish uplands, most extensively in the north and west in areas with mild slopes and inadequate drainage.  This environment governs the landscape of the gently rolling moorlands, particularly in the north Highlands.”

Official tasting notes for Peatlands from anCnoc are below, per the distillery. The whisky, by the way, was “matured for more than 10 years in American oak ex-bourbon barrels in the traditional dunnage warehouses” of Knockdhu.

Nose
Citrus sweetness to begin with, followed by a robust peaty presence. The underpinning is delicate and estery with spicy notes of green apples, cloves and nutmeg.

Taste
Coats the mouth with a sticky, creamy toffee richness only to cover this sweet prelude with a wave of warming wood smoke a few moments later. The finish is long-lasting but with a more gentle peatiness.