The name ‘sherry’ is a protected designation of origin under the European law: only wines coming from a specific region can be called sherry (the triangle between the cities of Jerez de la Frontera, El Puerto de Santa María and Sanlúcar de Barrameda). In the last few years the sherry council has been working hard to protect the name ‘sherry cask’ in the same way.

Until recently many distilleries were talking about sherry casks while they were actually sourcing barrels from other regions, especially nearby regions like Huelva or Montilla-Moriles. These zones produce similar wines also categorized as Fino, Oloroso, Pedro Ximénez… but they can’t be called sherry. However these zones were also providing casks to the whisky industry as ‘sherry casks’.

For instance in 2014 Glenfarclas presented a 1966 Fino expression. They invited a group of journalists to learn about sherry casks by visiting their cask supplier José y Miguel Martin which is based in Huelva, outside of the official sherry triangle. This leads to the question whether a cask can be called sherry cask if the wine used to season it cannot be called sherry? In this case, I believe Glenfarclas chose not to mention the word ‘sherry’ on the label and only talk about a ‘Fino cask’ in official communications.

This problem should now be solved as the term ‘sherry cask’ will soon be protected and will only apply to barrels that were seasoned by authorized suppliers within the sherry area, with wines that follow the regulations of the D.O. Jerez. Some bodegas that were originally based in Huelva have now found a way around this by buying premises in Jerez and registering in both denominations.

At the beginning of this article I said American oak solera casks never leave the sherry area and are not involved in whisky maturation. This is not entirely true, there are a few examples of whiskies that were matured in actual solera casks taken directly from a bodega.

For instance the highly regarded Bodegas Tradición sold a few very old Oloroso, PX and Palo Cortado casks to Glengoyne and Tomatin which they used to finish a whisky in a ‘Whisky meets sherry’ box which also included a bottle of sherry. The same bodega worked with Bavarian whisky Slyrs and Arran for a similar concept. These casks were up to 100 years old and they had been used to actually mature ‘drinking sherry’.

Other examples include a Spanish whisky distilled by DYC and matured in a Palo Cortado cask by Equipo Navazos. I assume the Matusalem casks used by The Dalmore are also taken from the actual solera at González Byass. Bruichladdich has been working with Fernando de Castilla for bottlings in which the bodega was explicitly quoted to provide ‘genuine’ Oloroso and Pedro Ximénez casks.

However solera casks are so rare that I can’t think of other recent examples, at least not where it was explicitly communicated. 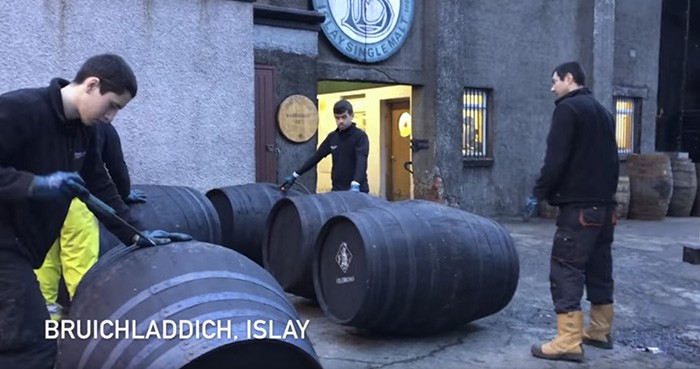 Whether solera casks should be considered ‘genuine’ sherry casks like some distilleries argue, is a tricky question. They simply have a different profile, with very little wood impact.

Ageing whisky in old solera casks is mostly a matter of oxidation and direct contribution from the wine. In a modern, bespoke sherry cask there are much more additive and subtractive effects of the oak, which means it will add more aromatic compounds like vanilla, toast, cloves and tannins which are also considered beneficial to a whisky (to a certain extent).

Solera casks tend to work better for more subtle and more complex maturation in the long term, whereas bespoke first-fill (European oak) casks can give you a quicker flavouring and colouring effect – kind of the ‘sherry bomb’ profile if you like. Is that better? It all depends what you’re aiming for.

When I’m telling all this in a tasting, even experienced whisky lovers are surprised and often disappointed to hear the vast majority of sherry casks wasn’t used to mature sherry at all and to hear the wines used are not the same as bottled sherry.

This comes down to the communications and marketing of whisky distilleries which is sometimes lacking depth and transparency in my opinion. The romantic pictures of bodegas full of old, black sherry casks are implying a simple link between sherry production and the re-use of these casks in whisky maturation. More importantly, distilleries are referring to aged, commercially available sherries while this is not the wine used for seasoning casks. As in other parts of whisky production, marketing is eager to create a false artisan image of the highly industrial processes that are driving the production of whisky (and whisky casks).

On whisky labels there’s also a general vagueness about casks, the type of wood used, etc. Just an example: did you know a “bodega cask” doesn’t mean the cask that was used in a bodega? It’s simply a different form factor: transport casks had the same contents but were slightly thicker and shorter in order to make them sturdier for transport, whereas bodega casks are slightly more elongated.

It should be clear that labels often simply say ‘sherry cask’ while this can mean so many different things. I hope this article provides a more realistic view on how your whisky was matured.