Many whisky lovers also say that sherry casks were clearly better in the old days. It is true that the production of sherry casks has been evolving, with larger scale, almost industrial production and a more ‘scientific’ approach, but I’m not sure things are all that different.

After all, you could argue that modern seasoned casks and the old transport casks were seasoned in a similar way: both are relatively young and both contained sherry for a few months before the whisky goes in. There is one major difference though that I find quite important: in the old days transport casks were fed with mature sherry that was ready for bottling. Nowadays this is mostly not true…

I have been wondering about this ‘seasoning sherry’ for a long time. Whisky distilleries are always referring to existing, commercially available ‘drinking sherry’, sometimes highly aged and rather expensive wines. A trend which has become more important as distilleries are often mentioning the name of the bodega that prepared the casks for them, as a sign of quality.

On the other hand I already figured out that well-aged sherry is often too expensive to make sense. Filling a butt with 500 litres of old Oloroso (even if you re-use it a few times) is simply not profitable.

I told you I was in Jerez recently. I visited the famous Bodegas Lustau, one of the well-known brands. They are a big player but they also have a very high average quality of wines. They are also involved in the seasoning of sherry casks, notably for the John Jameson & Son group. You may know the Redbreast Lustau Edition, a tasty example of a modern (slightly engineered) Irish whiskey finished in first-fill Oloroso casks seasoned at Bodegas Lustau.

If you read reviews of the Redbreast Lustau Edition, you will see they sent a bottle of the whiskey together with a bottle of Lustau Don Nuño to journalists, to let them try both liquids side-by-side. When I was visiting the Jameson distillery earlier this year and had a chat with head distiller Brian Nation, he also confirmed they worked with Oloroso Don Nuño.

So I was at Lustau and I specifically requested to try the Oloroso directly from the barrels that were currently being prepared for Jameson. I heard different stories before about the wine that was used, and I wanted to experience it myself. 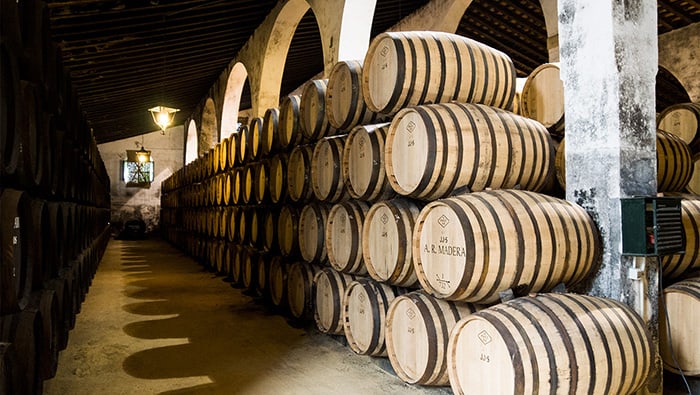 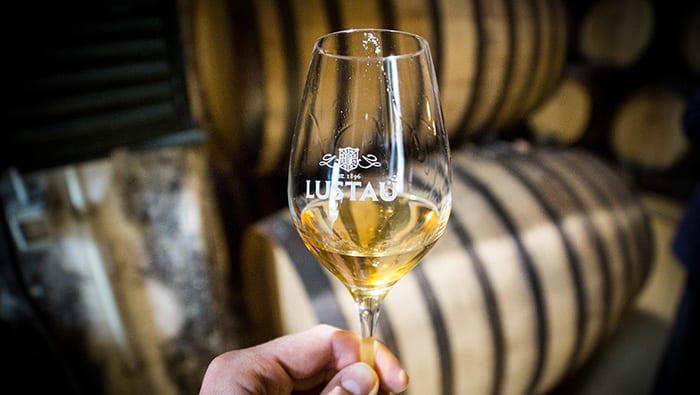 Notice how the colour is clearly different from any Oloroso you will find on the market. Much lighter, without any red hues that indicate oxidation. That is because it is technically an Oloroso wine, but a very young example, certainly not like Don Nuño. What they really use is a sobretabla, a young wine from the 2015 harvest. It hasn’t been maturing in a solera and you’d need a lot of sherry experience to identify this as an Oloroso.

Technically a Fino-style sherry is made from the finest must (first pressing) which is fortified to 15-16% to benefit the yeast film (flor). Oloroso-style sherry on the other hand is made fromrougher must (second or third pressing) which is fortified to 17%. In the absence of flor it will slowly start to oxidize, hence the dark, brown colour, but only after a few years of maturation. It seems strange to relate this young base wine to a 12 years old Oloroso like Don Nuño, except for the fact that a similar base wine also goes in at the top of that solera. Saying that the casks have been prepared with Don Nuño seems like an exaggeration.

Note that I’m not pinpointing specific bodegas or specific distilleries here: it seems to be an industry standard to use 2 years old wine. While this (barely) complies with the minimum requirements for a wine to be called ‘sherry’, you will not find it on the market in this form.

Maybe the difference is not all that important. During the maturation of an Oloroso, the compounds in this base wine slowly oxidize and they form the typical dried fruits, prunes, raisins and spices that we associate with mature Oloroso. In the case of an Oloroso sherry cask, these molecules are stored in the oak’s pores and perhaps they undergo a similar oxidation while the whisky is inside, leading to similar flavours? Even then it seems a little far-stretched for whisky distilleries to refer to specific commercially available sherries when talking about their sherry casks, as they probably didn’t use the same product for seasoning.

This can also explain why a mature Fino and Oloroso sherry are light years apart in terms of flavour whereas whisky matured in a Fino cask is sometimes surprisingly close to a whisky matured in an Oloroso cask, a remark I made after trying the Tomatin Cuatro series for instance. At a young age the difference between the different wines is fairly small.

The preference for young (and cheap) base wines also explains why you rarely see Amontillado or Palo Cortado casks being used for whisky maturation. The nature of these wines (product of two styles of maturation, first under flor, followed by an oxidative maturation) means you will need at least +/- 10 years of ageing before you have Amontillado or Palo Cortado sherry. Seasoning a cask with these wines will be much more expensive than using a 2 years old Oloroso or Pedro Ximénez.