One of the unfortunate realities of the global coronavirus pandemic is that whisk(e)y festival all over the world, including Scotland, have been getting cancelled. A determined Scotch whisky crowd will find a way, however, and to that end the Tomatin brand has teamed with a number of other labels to host what’s being called the world’s first virtual whisky festival.

The Lockdown Whisky Festival, according to those behind it, will air on Tomatin’s YouTube channel on April 4th from 2pm to 5pm GMT (in the United States, starts at 10am Eastern, 7am Western). During those hours “brand ambassadors from multiple international producers [will] unite to engage with the global audience. Brands to appear on the livestream include Adelphi, Arran, BenRiach, Cù Bòcan, GlenAllachie, Glencadam, Glen Moray, Kilkerran, Kilchoman, Paul John, Tomintoul and of course, Tomatin.”

“The greatest benefit to organising the Lockdown Whisky Festival is that it’s virtual,” said Scott Adamson, Global Brands Ambassador at Tomatin Distillery, in a prepared statement, “so we can bring the community together to enjoy and learn from some of the best distilleries in the industry, all from the comfort of home at a time when staying in and staying safe has never been more important. 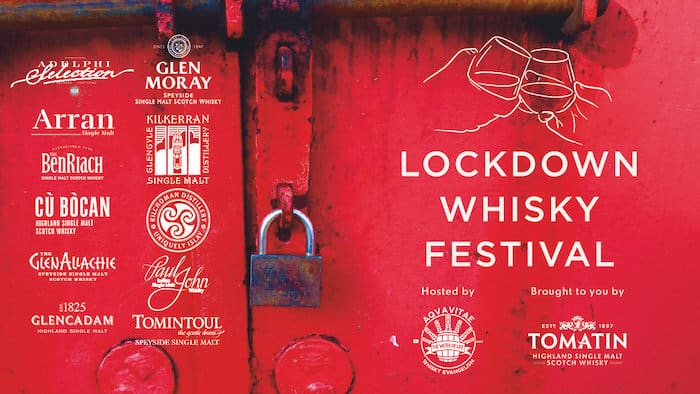 “It’s exciting to be the first distillery to host a virtual whisky festival and we’re thankful for the other distilleries who have chosen to get involved and support it. We will be encouraging viewers to use #LockdownWhiskyFestival on social when they raise a dram with us next week.”

The festival will be hosted by Aqvavitae, an independent whisky influencer, who will be “asking questions and hosting the festival as we virtually explore the expressions on offer during each brand’s mini showcase.”

“Following weeks of unfortunate postponements and cancellations,” added Aqvavitae, “it’s really refreshing to be part of the world’s first virtual whisky festival. Spearheaded by Tomatin, what we lose in not sharing the same space we gain in global reach and inclusion. It’s great to see so many distilleries and producers coming together in the spirit of sharing to realise this. Can’t wait!”