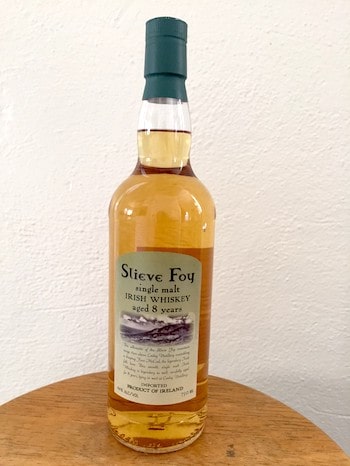 As of 2013, Slieve Foy Single Malt Irish Whiskey, named for the rugged, majestic highest mountain peak in the Cooley range in Northern Ireland, is no longer being made. Beam Global, Makers of Jim Beam products, had previously purchased formerly independent producer Cooley Distillery and in the process stopped production on the smaller brands, focusing instead on the more profitable, large production Kilbeggan brand, working to position it as an international competitor against Jameson.

Independent single malt producers in Ireland are still relatively few in number, with only a handful of producers on the whole island, although the industry is growing at a rapid clip. For frame of reference, there are more than 100 producers in Scotland.

Historically, there were once many more Irish distilleries, but economic and global trade factors like two World Wars, trade wars with Britain, and even the Prohibition of alcohol in the United States caused decline. Fortunately, over the last decade or so, Ireland has experienced a distilling boom, and the industry is gaining new brands, new producers, and new vibrance.

Slieve Foy Single Malt Irish Whiskey has a unique style, and is full of subtle personality, likely a result of the Cooley Distillery’s practice of double-distilling, which often leads to richer flavors and body. Most Irish whiskey is distilled three times, creating the light, smooth spirits Ireland is more widely known for.

Vital Stats: This Irish whiskey is 92 proof, made from a single malt of 100% barley, and aged for eight years in American white oak casks originally used for bourbon whisky. It is not chill-filtered and is distilled in traditional pot stills. This spirit retails for $49.99.

Appearance: In the glass, this whiskey appears a strikingly bright, thin yellow, almost bordering on chartreuse. It’s thin in body, with no real legs.

Nose: Odors of dry forest moss and green hay mingle with a lightly herbaceous note. On this finish, it’s earthy and lightly woodsy, like the light underbrush near an orange tree.

Palate: This single malt is bitter, herbaceous, but delightfully so. It’s grassy, with flavors of hard candy, Pernod, and dry rosemary bark. This pleasant, refreshing, spicy, and lightly woodsy finish lingers for a long time.

Slieve Foy Single Malt Irish Whiskey is uniquely delicious, bringing a perspective that is lighter and subtler than expected. It kept me sipping and marveling throughout. It is too bad it is almost impossible to get a hold of a bottle of it any more.