Editor’s Note: Samples of these whiskies were provided to us by those behind it. The Whiskey Wash, while appreciative of this, keeps full independent editorial control over this article.

On the heels of the U.S. release of two new whiskeys, announced this summer, I’ve been tasked with a roundup review of four Irish whiskeys from West Cork Distillers, a thirteen-year-old operation in tiny Skibbereen, Ireland (which, I feel I must note, is also the hometown of delightful rowing brothers Paul and Gary O’Donovan, who won a silver medal at the Rio Olympics).

West Cork’s story dates to 2003, when food scientist John O’Connell teamed up with two school friends, Denis and Ger McCarthy—the fishing boat on the West Cork label is a reference to the McCarthy brothers’ past lives as deep-sea fishermen. The trio started out in a category likely unfamiliar to most Americans: Drombeg, an unsweetened, 44-proof Irish liqueur, distilled from malt and sugar beets, intended mainly to be mixed into long drinks. They initially made it and Lough Hyne, a higher-proof version, in Denis McCarthy’s garage.

More recently, West Cork was behind the Pogues whiskey, “the official Irish whiskey of the legendary band,” which we reviewed earlier this fall. They’re reportedly one of only two independent distilleries in Ireland, and malt their own (Irish-grown) barley.

All four bottles have a similar design, with the bottom edge of the label cut into a map of the southern Irish coastline; the back notes West Cork is “the most southerly distillery in the Atlantic Archipelago.” 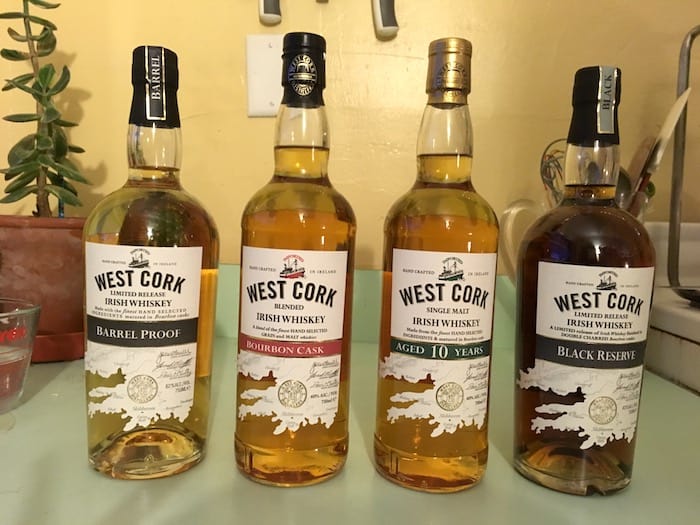 First up is one of West Cork’s two new U.S. releases, their barrel proof Irish whiskey. It’s an unspecified blend of malt and grain whiskeys, aged in bourbon barrels and bottled at a fiery barrel-strength 124 proof, and sold as a limited release.

Nose: Surprisingly demure for such a high-ABV whiskey. Vanilla, raisins, oak. Adding water reveals a grassy note, and not much else.

Palate: Quite sweet at first, dominated by vanilla and caramel. Peppery spice and a toasty grain note come into play after a moment. Oak and hay on the finish, with a light but hot mouthfeel. Fiery hot and fairly tasteless neat; cutting the proof down played up the malt notes pleasantly.

This one is decent, but as I noted, quite subtle for a barrel-strength offering. It’s straightforward and approachable when cut down with water, if not overly complex. A perfectly good opening to the batch.

Next, we have another bourbon cask-aged whiskey at a much milder 80 proof. Again, it’s a blend of grain and malt whiskeys, also of unspecified age.

Nose: Fairly indistinguishable from a bourbon, with major caramel, honey, and vanilla. I get just the barest hint of a grainy pie crust note, too, as well as some oak.

In a blind tasting, I’d mistake this for a bourbon ten times out of ten. That said, it’s pleasant and easy-drinking, and a hell of a deal at under $25. Between this and the barrel proof expression, I’d probably go with this one based on price.

West Cork’s Black Reserve, the other new entry to the U.S. market, is yet another blend of grain and malt whiskey, also finished in bourbon barrels. Again, no age statement is given, but based on color alone, it seems safe to assume it’s considerably older than either of the last two whiskeys. Like the barrel-strength expression, it’s a limited release.

Nose: A lot like the lower-end bourbon cask-finished whiskey, with a bit more depth. Both samples smell fairly sweet, but where the bourbon cask whiskey is merely sweet, the black reserve comes off as rounder. Vanilla, caramel, and dried fruit are there, but the biscuit note is a little stronger. There’s also a pretty powerful oak note in the background.

Palate: More caramel and vanilla, but better-anchored by the biscuit/pie crust note than the last sample. I also get toasted nuts on the back of the palate. The biggest difference, though, between this and its lower-end cousin, though, is the texture, which is satisfyingly mouth-coating. Based on the nose, I was expecting this to be too woody, but I didn’t find that to be the case.

This one is also quite bourbon-like, but a notch richer and more savory. It’s probably my favorite so far, although there’s nothing revelatory or hugely complex here.

Finally, we’re left with West Cork’s single malt. This one, like the others, is also aged in bourbon casks, and it’s the only one of the bunch with an age statement.

Nose: This one is definitely different. Strong green apple, pear, and grape notes open the nose, followed by honey. It’s very bright and fruity, almost tart. After a few minutes in the glass, I even get a whiff of lemon curd.

Palate: More fruit—apple, pear, and yellow plum—predominates on the palate. Maple syrup and honey also make an appearance, and wood lingers on the fairly brief finish. Like my first two samples, this one is quite light-bodied.

Of the four, the single malt definitely stands out—not as better or worse, just as very different in character. It’s a refreshing departure from the rest of the bunch, but also a fairly one-note experience, with a preponderance of bright green fruit and not much else.

None of these whiskeys really knocked me off my feet, but they’re all perfectly well-executed and approachable. Of the four, the Black Reserve was my favorite, but not by a huge margin—and for sheer value, the mid-shelf blended expression edges it out. I’m also intrigued by the single malt, if only because it’s such a departure from what I usually drink. All in all, this is a solid batch of whiskeys from an independent distillery.