Whiskey Review Round Up: Tyrconnell 10-Year-Old 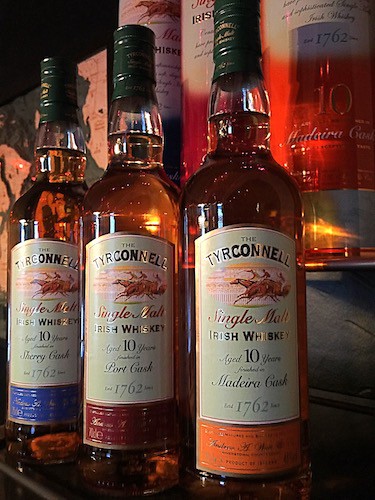 Tyrconnell is a label of single malt whiskey produce at the Cooley Distillery located in Ireland. Sourcing can be a notoriously foggy issue in the world of Irish whiskey. With far fewer distilleries – a grand total of 12 – operating in Ireland and Northern Ireland in comparison to Scotland, oftentimes the precise origin of a bottling remains a mystery to the consumer. Tyrconnell bucks this particular trend by divulging somewhat more information than simply the nation of origin for their whiskies.

The Cooley Distillery was established in 1987 at the site of a former potato schnapps production operation. Malt whiskey distillation began in 1989. In terms of a label, Tyrconnell has roots which reach back to 1762. The label was dormant for more than six decades following the closure of the previous production operation at the Old Watts Distillery in Derry, but the name was resurrected in 1988 when Cooley acquired the brand. The label is currently owned by the Kilbeggan Distilling Company, which is itself under the massive Beam Suntory umbrella.

The whiskeys I’m reviewing today are a trio of Tryconnell 10-year-olds, each aged in a different type of cask (madeira, port, sherry).

Nose: Floral notes. Fairly strong wine presence. Notes of lemon-lime Italian soda. Not overly complex, but fairly bold. The nose tends to fill the air around the glass rather thickly.

Palate: Light mouthfeel and presentation. Sweet. Notes of dry chocolate-roasted almonds, clover honey, and ribbon candy. The finish is soft and silky with lingering notes of honey and oak.

I found this version to be the most drinkable of the three reviewed here today. There is a soft and sweet presentation throughout. It feels well-balanced and like a complete whiskey. It is very enjoyable. The pairing of the single malt with madeira is right on the money, bringing out the best in the dram. Quite a duet. In fact, I had a hard time coming up with proper notes on this particular whiskey as it has a sort of “shut up and drink” quality to it. A very nice dram with which to unwind.

Nose: The nose is lightly herbal while mostly sweet and fruity. Vine-ripened fruit with a light hint of ash. A bit of a solventy bite.

Palate: A fairly dry and sweet arrival. Light mouthfeel. Notes of vanilla, cereal grains, brown sugar, and tart cranberry. The finish transitions quickly and matches the lightness of the mouthfeel. A soft burn that is relatively short. There are lingering notes of fruit and toffee.

Sweet, dry, and easy to sip. This would make for a good after dinner malt.

Palate: Sweetness right off the bat. Buttery cinnamon, like cinnamon roll filling. Some spice presence with continued cinnamon and nutmeg. Vanilla, maraschino cherries, and cinnamon jelly candies. The finish features a burn which flashes in the beginning and settles into a warm glow with lingering notes of cherry cola.

This is definitely a whiskey for those with a sweet tooth. I found it interesting mostly on account of the tart cherry notes that come and go. The whiskey presents itself almost like a premixed cocktail or even a higher proof liqueur, but not necessarily a great one. There are reasons I generally prefer my whiskies neat, after all. This is a competently sippable dram on its own, but would improve greatly with some mixing.

I found plenty to appreciate with the three Tyrconnell offerings I reviewed here. As I mention time and again, I can never get too much information regarding any individual dram I am consuming. Having an age statement as well sourcing information for each of these bottlings sets them apart from a great many of the Irish whiskey offerings sharing shelf space with them. In the case of the madeira and, to a slightly lesser extent, the port, I feel the whiskey is a quality dram worth its asking price. The sherry was just far too forward and sweet for me.

Personally, I would love to see this lineup offered in a seasonal sampler similar to offerings from Jameson and Johnnie Walker. This way the consumer can get to know each separate identity and make a more well-informed purchase.

Shares
2.4k
Views
Share on FacebookShare on TwitterGet Our Newsletter
Cheers to the Dads! Personalize a bottle of his favorite whiskey to create a modern gift for the modern man. Use code: FATHERSDAY20 for $20 off your next order of $100 or more at ReserveBar