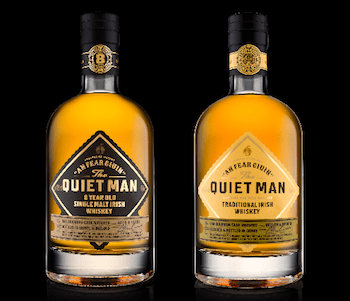 St. Louis-based liquor company Luxco has been on a mission of late to capitalize on the rise in whiskey’s popularity. They’ve already had a hand in the revival of the Rebel Yell and Yellowstone bourbon brands and the creation of Blood Oath, for example. American whiskies aren’t the only card they have up their sleeve, however, and they’re now unveiling their first-ever Irish whiskey known as The Quiet Man.

The Quiet Man, according to Luxco, was created by one Ciaran Mulgrew to honor his bartender father, John Mulgrew. According to the younger Mulgrew, “in more than 50 years behind the bar, my father saw and heard it all, but like all good bartenders, John Mulgrew was true to the code and told no tales. He was ‘The Quiet Man,’ or as they say in the pubs of Ireland, ‘An Fear Ciuin.'”

The whiskey is said to be “distilled in traditional Irish whiskey pot stills, matured in oak barrels and recasked in first-fill bourbon casks.” It is being made available in two different offerings, The Quiet Man Traditional Blended Irish Whiskey, and The Quiet Man 8-Year Single Malt Irish Whiskey, both of which are bottled at 80 proof. The former, priced at around $40, is aged four years and has a high malt percentage. The Single Malt, by comparison, prices around $50.

“The difference between a good whiskey and a great whiskey lies not just in picking the best ingredients and having the most skilled distiller,” said Mulgrew in a statement. “It lies in selecting the finest barrels to let the whiskey mature in. Our unique process of finishing the aging in barrels that previously held bourbon but never whiskey allows The Quiet Man to soak up those wonderfully sweet yet spicy oak flavors, and the result is two great Irish whiskies.”

Both whiskies will be available starting this month in the US. They’ve already been available in a range of overseas markets since last year.