The Liberator Irish whiskey label is owned by Wayward Irish Spirits, a family run Irish whiskey company that reconnects its founder, Maurice O’Connell, with his family’s roots of supplying spirits to the gentry of Kerry in Ireland. Liberator specifically ties to his family in that it “celebrates the legacy of Daniel O’Connell, born in Kerry in 1775” and said to be “the original campaigner for civil rights, heedless of race, gender or creed and often hailed as the greatest ever Irishman.” It is his spirit that reportedly inspires how Wayward does its whiskeys.

For the Liberator brand two new releases were recently put into retail in Ireland as part of their new Small Batch series of blends. The first is the Small Batch: Port Finish, a blend of malt and grain whiskeys “that have been matured initially in first fill American ex-Bourbon casks. The Malt has been finished for 9-12 months in a selection of Tawny and Ruby Port casks and the Grain has been partly finished for 12 months in a range of Ruby Port casks.” 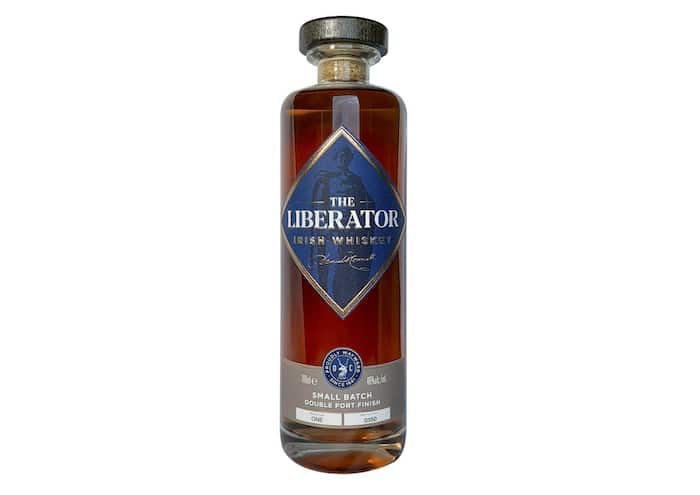 “We are excited to be launching this blended Whiskey that we have been working on during the lockdown,” said O’Connell in a prepared statement. “This first release of 3,000 numbered bottles from our Small Batch series has a high Malt content of 42% giving it depth and complexity while being elegant and approachable. Bottled at 46% ABV, gently cut over 5-6 weeks, natural colour and not chill filtered.”

Joining it is the Small Batch Cask Strength. As O’Connell describes it, “we are also releasing 156 hand numbered half bottles (350ml) of The Liberator Small Batch Cask Strength, bottled at 61.7% ABV, which has been really well received by the Whiskey community. This is the first from our Storehouse Special range, which are small releases of interesting Whiskeys from our Bonded Storehouse, whether Cask Strengths versions or test releases of possible Whiskey expressions.”

Rich dried fruits on the nose. Blackcurrant, cloves, orange zest and pear drops and a creamy mouthfeel on the palate. A medium length finish with vanilla, almonds and some spice.

13
Shares
938
Views
Share on FacebookShare on TwitterGet Our Newsletter
Get The Glenlivet 18 Year Old at ReserveBar. Shop now!