The new Craft Irish Whiskey Co’s The Devil’s Keep (52% ABV), which launched at the end of last month, was distilled back in 1991, beginning in 200-liter “first fill” American oak casks previously holding bourbon. From there, it was transferred to French oak barrels, previously used to house Tawny Port, before finishing in virgin Hungarian oak.

Each bottle of the whiskey, of which just 333 have been released, is designed by Tiago Russo and comes stored in two custom-made cases secured by a custom Japanese-style lock. The cases also include a carafe of pure Irish spring water, an “Angel’s Share” atomizer from a perfumer said replicate “the unmistakable aroma one gets as they walk through the hallowed halls of a maturing whiskey warehouse”, a jar of malted barley sourced from the malting house as the single-malt, two custom-designed glasses and obsidian whiskey stones. 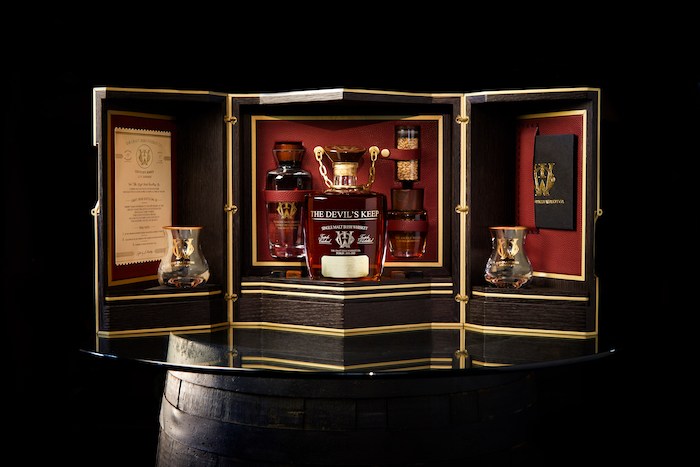 The launch of this super premium Irish whiskey offering comes at a time in which Irish whiskey is seeing a renaissance as it emerges from troubled times in the past. Irish whiskey exports, it was noted, have “leapt by an extraordinary 300% in a decade and are demonstrating 12 to 14 percent year-on-year growth. Current Irish whiskey production already matches the historical 12 million case high before the turn of the last century, with forecasts that this will rise to 24 million by the end of this decade.

“Working distilleries are opening to meet the surge in demand in this fastest growing brown spirits market segment, with about 32 distilleries now operating in Ireland.”

“We’re thrilled to be celebrating Ireland’s whiskey resurgence by launching the Devil’s Keep,” said Jay Bradley, founder of The Craft Irish Whiskey Co., in a prepared statement, “which has been a crusade sparing no expense to source the finest ingredients, and the most sublime flavours – it truly is the culmination of our devotion, passion and craft.

“For many years Scotland has dominated whiskey through the sheer breadth and depth of its offering. They’ve offered everything from lower-shelf, mass-produced blends to mid-shelf, higher-quality household names, as well as top-shelf brands. Yet, there has always been a gap in the market for ultra-luxury whiskeys.

“Born from a conversation with my late father, The Craft Irish Whiskey Co. has a single mission: to create the finest whiskeys Ireland has ever made and to redefine global perceptions of luxury, while building a legacy.”

The Devil’s Keep Irish Whiskey is available for the price of 10,000 Euros, or around $12,200 USD. Looking beyond this offering, plans are next in the works for a 7 piece collection in which “all pieces are one of a kind ‘The Emerald Isle Collection’ in partnership with Fabergé, bringing together the strong heritage of both brands in a series of highly collectable and unique special-edition bottles.”