Following the launch of The Devil’s Keep this last year, the company behind it, The Craft Irish Whiskey Co. has debuted a new luxury Irish whiskey release in partnership with fine jewelry company Fabergé.

The Emerald Isle Collection is a series of seven highly collectible and custom-made whiskey sets. Each set features two bottles of ultra-rare, 30-year-old, triple distilled Irish whiskey aged in 200 liter ‘first fill’ American oak casks, before being finished in a rare single 40-liter Pedro Ximénez sherry barrel. The whiskey creation process allowed for a unique tasting profile described by the brand that ranges from chocolate fudge and maple syrup on the nose to sweet leather and ripe banana on the palate with a long finish containing hints of creamy meringue and rich vanilla cigar smoke. 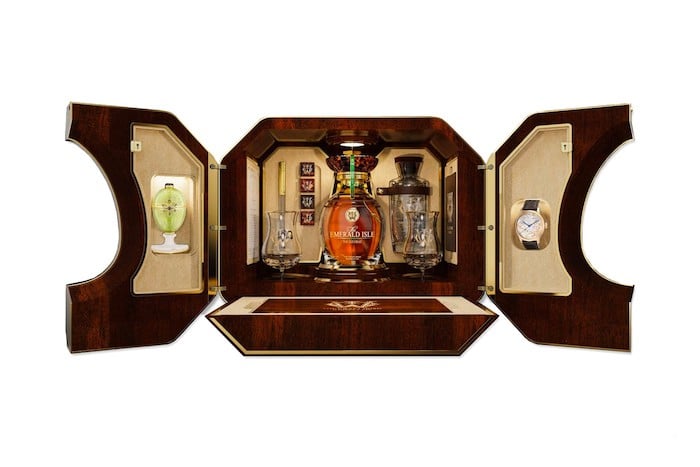 Accompanying this whiskeys and inspired by ‘The Seven Wonders of Ireland’, Fabergé is aiming to honor Irish heritage in the form of its first-ever Celtic Egg bespoke objet (handcrafted from 18k yellow gold and decorated with gemstones), as well as a bespoke Fabergé Altruist rosegold watch and whiskey accessories customized to pair with the egg, including two ultra-rare Cohiba Siglo VI Grand Reserva cigars, a gold-plated cigar cutter, gold plated water pipette, pure obsidian whiskey stones, a hip flask with a sample of the Emerald Isle whiskey and a carafe filled with Irish spring water from the same region where the whiskey was made.

The dark walnut experience box each set is presented in is said to be inspired by the shape of an emerald, representing the natural beauty of Ireland, and features an illustration of one of the ‘wonders’ of Ireland and its geographical coordinates, with a frontal egg-shaped aperture and a frame of colored gemstones. Each of the seven bottles has been inspired by key Fabergé design elements, set with “responsibly sourced” emeralds from Gemfields’ Kagem mine in Zambia on the neck and lowermost part of the bottle.

“We are more than delighted to be partnering with prestigious atelier Fabergé to launch ‘The Emerald Isle Collection,’ which is an extraordinary bespoke set, and will truly put ultra-rare luxury Irish whiskies on the map,” Founder of The Craft Irish Whiskey Co. Jay Bradley said in a prepared statement. “Fabergé is an iconic brand with an enduring legacy that continues to evolve and knows no bounds, so we cannot think of a better collaboration for a luxury whiskey from Ireland.

“This is simply a dream come true for me and the team – and an unbelievable elevation for a 30-year whiskey, which was already going to be a particularly sought-after collector’s item. With the Fabergé addition, there is surely nothing that compares for the ultimate aficionado.”

The highly limited release is taking place via a private auction in Houston, TX  and at a world record starting price of two million dollars. The Craft Irish Whiskey Co. is set to donate 100% of the proceeds to charity with 50% benefiting the Correa Family Foundation supporting children affected by serious illness. The remaining 50% will be donated to the buyer’s charity of choice.

For those curious about the Fabergé side of things more than what was presented above, more official details are below for your consideration.

Each of the seven beautiful egg objets took over 100 work hours to make. It was vital that close contact was kept with The Craft Irish Whiskey Co. to ensure each objet epitomised this very special project and their passion for Ireland.

A variety of specialists were required from Dr. Mohr’s team of craftspeople to achieve the vision, including a goldsmith, metal spinner, gem and diamond setter, gemstone carver/polisher, engine tuner (for the guilloché detail), model maker (for the Celtic knots, mounting and middle ring), polisher and an enameller.

Each egg is handcrafted from 18k yellow gold and features Fabergé’s legendary guilloché vitreous enamel in a pastel green; the green, white and gold colours of the egg symbolise the Irish flag. Guilloché enamelling is a time-honoured technique which combines the ornamental art of engraving using an engine-turning machine technique, combined with vitreous enamel which is hand-painted onto a surface in a series of layers and bonded via heat of 900 degrees centigrade. It can take up to five layers and five firings in the kiln to create the desired effect, which has the illusion of shimmering liquid silk.

The exteriors of the seven unique eggs are adorned with a pavé Celtic knot, set with 104 brilliant-cut diamonds, a renowned symbol of Irish heritage which has no start or finish, representing eternity, love and friendship. This symbol frames a coloured gemstone at its centre. Each of the seven Fabergé eggs features a different gemstone on its exterior: emerald, blue sapphire, ruby, amethyst, rhodolite, spessartite or tourmaline, representing each of the seven locations, from The Blarney Stone to the Giant’s Causeway, and its rich Irish mythology. A matching cabochon coloured gemstone is also set on top of the egg, which itself is mounted on a rock crystal plinth with gold base. The Celtic knot motif is also echoed within the mounting of a surprise hidden within the egg.

The pedestal that the objet sits on is made of rock crystal which has been hand cut and polished from one rock. This element was crafted in the German city of Idar-Oberstein, a place world-renowned for coloured gemstone cutting over the last two centuries, by a master stone engraver who has worked for Fabergé for more than two decades. The gold frame on the bottom of the pedestal has been hand mounted from gold sheet and 32 additional diamonds have been set on the gold ring joining the pedestal and egg. Celebrating the unique nature of each egg objet, you will find the Fabergé hallmark on the rim of the base, accompanied by the individual number and coordinates of the ‘wonder’ it is dedicated to.

In true Fabergé spirit, a surprise awaits inside in the form of a rough, uncut emerald sourced from Gemfields’ Kagem mine in Zambia, presented on a gold guilloché base with intricate claw setting, set atop a guilloche engraved gold disk. This is the first time in Fabergé’s history that the Maison has featured a surprise of this kind before. It invites collectors to further customise the creation by requesting that Fabergé converts the beautiful rough emerald as part of a bespoke set or piece of jewellery.